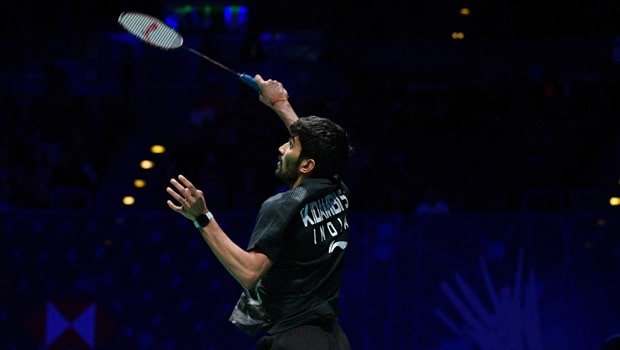 India had a mixed start at the BWF World Championship as B. Sai Praneeth suffered a shocking defeat in the first round whereas Srikanth Kidambi powered his way through to the second round of the tournament.

Despite a good start from Sai Praneeth he simply could not make the most out of it against Dutchman Mark Caljouw in his opening match of the men’s singles category. The Indian shuttler started strongly and won the first game 21-17. However, Caljouw came back strongly by winning the second game. The Dutchman dominated the second game and won it by a scoreline of 21-7. The second game broke Sai Praneeth’s morale and it was decisive in the context of the match. The Indian never really was in the match after losing the second game. Although he fought his way through the third game he never looked like winning it. Caljouw won the match 17-21, 21-7, 21-18  and made his way to the second round.

Srikanth Kidambi had no difficulties in winning the first-round clash at the BWF World Championships as he defeated Spain’s Pablo Abian in straight games. The former World No. 1 was pretty dominant in his win. Srikanth started the game with a lot of authority and did not allow Abian to settle down. He finished the first game with utter dominance winning it 21-12. The second game was also more of the same. Despite Abian’s fightback, Srikanth held his own and led the counter charge. He gradually went ahead in points beating the Spaniard 21-16 in the second game. He will now face Chinese shuttler Li Shifeng in the second round of the BWF World Championships.

However, India ran out of luck in the Women’s and Men’s doubles category. The female pair of Sanjana Santosh and Pooja Dandu were up against Dutch pair Alyssa Tirtosentono and Imke Van der Aar. The Dutch women started the game with a lot of dominance and won the first game 21-12. However, the Indian pair could not continue as Dandu was feeling some discomfort and it meant they had to withdraw from the BWF World Championships.

The Indian Men’s Doubles pairing of  B. Sumeeth Reddy and Manu Attri also struggled to make their way past first-round opponents Ramus Kjaer and Joel Eipe. Although they did not forfeit their match, they were simply no match to their Danish counterparts. Reddy and Attri did not go down without a fight but they were no match for the Danish pair, hence losing 21-16, 21-15 in the first round of the BWF World Championship.