Home » Badminton » Brief, brutal and no longer the bridesmaid: PV Sindhu is finally a World Champion

Brief, brutal and no longer the bridesmaid: PV Sindhu is finally a World Champion 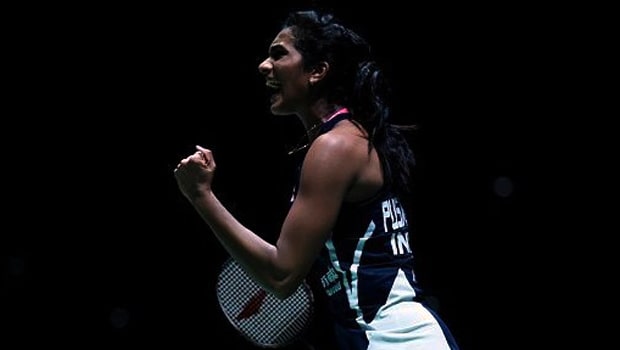 After a one-sided exhibition of dominance for 38 minutes, India’s ace shuttler PV Sindhu had championship point. She launched another smash, in what had been a tirade that Japan’s Nozuki Okuhara had no answers for, and etched her name in the history of Indian sports. She achieved what no man or woman that has represented India ever did by winning gold at the BWF World Championships in Basel. PV Sindhu had just become a World Champion. And it did not come easy.

Since turning pro in 2010, Sindhu has always been the metaphorical bridesmaid. She watched from the rafters as Saina Nehwal news of dominating the early years of this decade and had to be content playing second fiddle to the former World No.1. She finally made her mark at the 2013 World Championships, where the then-18-year-old captured Bronze and was India’s only medallist at the event. Over the next half a dozen, Sindhu has gone from strength-to-strength, beating champion after champion and earning her reputation as one of the globe’s premier badminton players.

But as fate would have, Sindhu would struggle to get over that final hurdle. She repeated her Bronze medal performance at the 2014 World Championships, had to settle for a third-place finish at the Asian Games, the Commonwealth Games as well as the Asian Championships that very year. She finally pole-vaulted over the semi-final hurdle at the 2016 Rio Olympics and went toe-to-toe in the first set against the world no.1 Carolina Marin, winning it 21-19. Representing a country starved for individual Golds at the Games, Sindhu stood at the gates of immortality. But the moment got too big for the Hyderabad-native. The errors crept up, her Spanish opponent grew into the game and beat India’s bright young hope in three sets to capture gold for her country.

Marin would cause Sindhu more heartbreak at the 2018 World Championships in Nanjing, beating her in straight sets in the final to capture her third world championship crown. An ACL injury kept the Spaniard out of the 2019 edition, giving Sindhu a clear path to finally capture that elusive crown. She breezed through the early rounds, made short work of her opponents before running into the world no. 2 Tai Tzu-ying who she beat in an epic three setter to reach her third straight BWF World Championship final. But a familiar foe awaited Sindhu in the showpiece finale.

At the 2017 edition, Sindhu made it to her first BWF World Championship final against current world no.3 Nozomi Okuhara. The then fiery 22-year-old Sindhu and the Japanese played out one of the best finals in the history of the event, where the Indian ace would lose 19-21, 22-20, 20-22 after a titanic battle. Through the past six years, PV Sindhu latest news have blossomed into one of the greats of the game. But like the rest of the pack, she was yet to deliver in the biggest game. The big final, against the biggest names in the sport. On Sunday, she earned another chance to cement her legacy. And post a demolition derby that lasted less than 40 minutes, Sindhu reached the mountain top.

She stood on top of the podium with a gold medal around her neck as tributes poured in for the 24-year-old. And as she revels in the adulation in the coming days, nothing would taste as sweet as her redemption. Read more recent badminton news.

Previous Post
Fraser Forster dreaming of England recall
Next Post
A battle against ‘God’: How Sumit Nagal stood up and stood out against Roger Federer