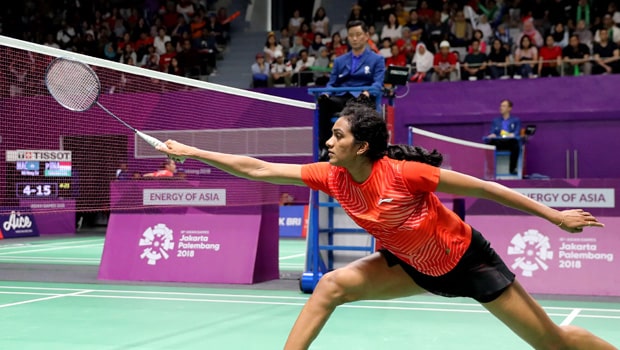 Indian ace PV Sindhu had a decent outing at the Swiss Open apart from getting dominated in the finals against Carolina Marin. While the Indian shuttler showed that she is returning to her groove with some great gameplay en route to the finals, she was completely outclassed and outwitted by her rival Marin. The Spaniard won the match 21-12, 21-5 in only 32 minutes.

However despite the humiliating defeat, former Commonwealth Games Silver medallist and four time national champion Chetan Anand feels there is nothing to worry about the reigning World Champion’s form. Anand feels that Sindhu has not played that many tournaments after the lockdown and therefore she has not achieved her desired rhythm.

“She played well in the Swiss Open. Reaching the finals of such a difficult tournament is no mean feat. I think its a good result. She is definitely getting better with time. She beat the player (Mia Blichfeldt) who she could not beat in Thailand,” Anand told the Olympic Channel.

The 25-year-old has been on and off recently, she lost in the first round of the Thailand Open Super 1000 to Mia Blichfeldt. Therefore when the chance of redemption came to her in the semifinals of the Swiss Open she grabbed it with both hands by defeating the 23-year-old Dane.

Also, her performances in the recently concluded tournaments give Anand hope that she will turn up big at the Tokyo Olympics later this year.

“I don’t think the loss is much of a concern. It is just an off day. This happens in the career of a player But reaching the final is a big thing. Maybe the rhythm was not there. She might have been physically tired. It will not happen regularly. It is all about the particular day. Hopefully, she will do well in the Olympics.”

Although Sindhu’s last major title came at Basel where she won the World Championship but her record in finals is of great concern for her fans. However, Anand thinks that it is all media hype and rubbishes all of the mentality claims in big matches.

“She had lost many finals before 2019. When she won the World Championship then the media said that she had broken her mental barrier of losing finals. Now again she has reached a final and she has lost it. Once again, the media is questioning her mental fortitude. These are unnecessary things to talk about. A player just plays on the court without thinking about any of these things. She will surely do well in the Olympics,” Anand asserted.