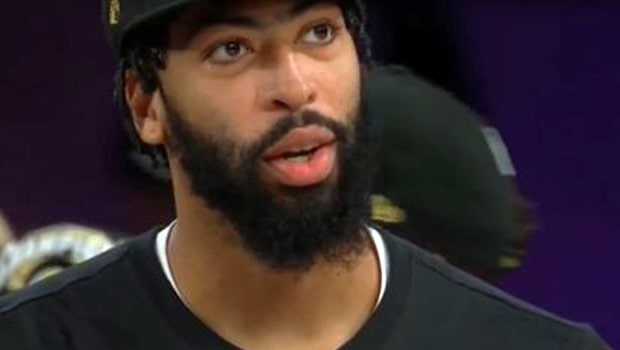 The LA Lakers have suffered a huge blow as their talisman Anthony Davis has re-aggravated his Achilles tendon injury, which is expected to keep him out of action for at least two to three weeks. Davis suffered the injury during the Lakers’ 122-105 loss against Denver Nuggets on Sunday.

In fact, Davis had missed two games last week with tendonosis in his right Achilles but had to leave the match against Denver Nuggets after scoring 15 points. Thus, Davis is unlikely to return to the lineup prior to the NBA’s March 5-10 All-Star break, sources told ESPN.

Earlier, it was suspected that Davis had suffered a calf strain but the MRI reports later disclosed that the injury is more serious than what was earlier predicted.

ESPN’s Adrian Wojnarowski provided an update about Davis’ return as he tweeted, “Davis underwent an MRI today, which revealed a re-aggravation near his Achilles. Lakers and Davis will be conservative on a return to play, which could be sometime after the All-Star Break running March 5 to 10.”

Meanwhile, Davis has remained prone to injuries in his young career and he also had injury woes when he used to play for New Orleans Pelicans. Davis is an integral part of the LA Lakers and the team will hope for his speedy recovery.

Davis is averaging 22.5 points per game this season and he will be looking to make a roaring comeback after recovering from his injury. The 27-year old has provided great support to LeBron James and both of them are always instrumental in the success of the team.

Lakers have won 21 matches whereas they have lost seven games and thus they are placed at the second position in the Western Conference. The loss against Denver Nuggets was their first after seven matches. LA Lakers will next face Minnesota Timberwolves on Wednesday.