Home » Basketball » Anything is possible: Stephen Curry on making 16 threes in next match against Portland Trail Blazers

Anything is possible: Stephen Curry on making 16 threes in next match against Portland Trail Blazers 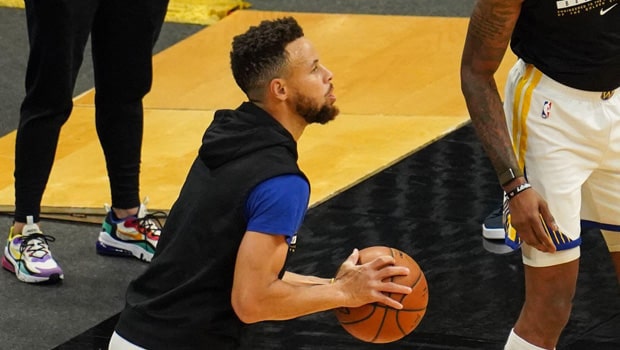 Golden State Warriors talisman Stephen Curry is on the cusp of creating history. Curry is only 16 threes away from leapfrogging Ray Allen’s record of most threes in the regular season. The linchpin is not ruling out the possibility that he might achieve the coveted record in the team’s next match against Portland Trail Blazers.

GSW won their 20th match of the season as they convincingly defeated Orlando Magic by 126-95. Curry was once again at his lethal best as he scored 31 points, including seven three-pointers to inch closer to Ray Allen’s record. Furthermore, he provided eight assists for his team.

Curry has scored 2958 three-pointers in his glorious career while Ray Allen tops the chart with 2973 threes under his bag.

If Cury goes on to score 16 threes in the next match against Portland Trail Blazers, he will also break his teammate Klay Thompson’s record of most threes in a single match, which is 14.

Speaking to the media after his team’s win, Curry said, “Anything is possible. What is it 15? That’s funny because I know what that means. Klay’s record and all of that too. So, we will see.”

“If you’ve seen the way I play, especially recently, I’m not shy about shooting the ball. The game will dictate what that looks like. I’m not coming out with that as a true goal or like how I play, but crazier things have happened.”

On the other hand, GSW head coach Steve Kerr predicted that Steph Curry is going to shoot a lot against Portland Trail Blazers on Wednesday.

“Absolutely… He’s Steph Curry so anything is possible. He’s made half-court shots in back-to-back games, so…”