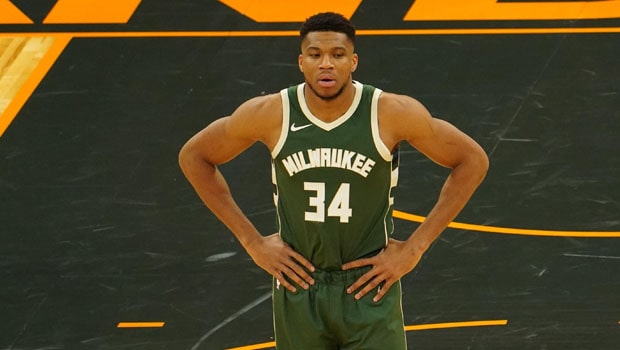 Milwaukee Bucks superstar Giannis Antetokounmpo is showing why he is one of the best players in the NBA. The Greek Freak has bagged the MVP award in the previous two seasons and he is once again coming up with strong performances in the ongoing edition to be in the MVP race.

Larry Bird is the only player in NBA history who has won the MVP award thrice on the bounce and if Giannis continues the same form, he has a good chance to match the legendary player’s record.

On Saturday, the Bucks defeated Portland Trailblazers by 127-109 as Antetokounmpo came up with a prolific performance. The 26-year-old talisman scored a mammoth 47 points and also came up with 12 rebounds.

The power forward tore the Portland Trailblazers’ defense into pieces as he came up with a dominating display. Moreover, he received support from Khris Middleton, who scored 20 points whereas Jrue Holiday scored 22 points.

Furthermore, Giannis scored 18-18 from the two-pointers. Thus, he bagged another record as he became the 2nd player in NBA history to go 18-18 on two-pointers in a game, joining Wilt Chamberlain, who went 18-18 on Feb. 24, 1967, against the Baltimore Bullets.

Meanwhile, Milwaukee Bucks defeated Sacramento Kings by the skin of their teeth by 129-128 as Jrue Holiday top-scored with season-high 33 points, 11 assists, and seven rebounds on Saturday night. This was a crucial win for the Bucks as they were without the services of their main player – Giannis Antetokounmpo.

Giannis will aim to continue the good show in the league. Milwaukee Bucks will next lock horns against the Golden State Warriors on Tuesday.