Home » Basketball » He is playing at MVP and Hall of Fame type level: Kevin Durant on Stephen Curry

He is playing at MVP and Hall of Fame type level: Kevin Durant on Stephen Curry 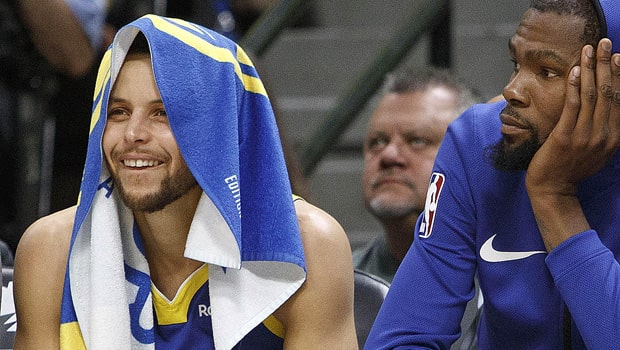 Golden State Warriors talisman Stephen Curry just keeps getting better with every match. Curry has started the ongoing NBA 2021-22 season on a high and he is breathing down the neck of the opposition with his accurate shooting. The veteran player hardly has any chink in his armor and he is just unstoppable when he gets going.

Curry once again showed his mettle as Golden State Warriors defeated Eastern Conference giants Brooklyn Nets by 117-99. The linchpin as usual played an instrumental role in the success of his team as he dropped 37 points and also scored seven rebounds. Furthermore, Wiggins had 19 points, followed by Jordan Poole’s 16 points.

Curry has been a massive scorer for Golden State Warriors and this was the ninth occasion when he top-scored for the team in the 14 matches they have played. In the 14 games Curry has played in the ongoing season, he is averaging 28.7 ppg, 6.3 rebounds, and 6.6 assists, which is a sensational start to his campaign.

On the other hand, Kevin Durant scored 19 points for Brooklyn Nets while James Harden dropped 24 points but still, they fell short by 18 points, which is a big margin.

Durant heaped praise on Curry after the match and stated that he is playing at MVP and Hall of Fame type level.

“He’s playing at a MVP & Hall of Famer type level. I learned from them while I was there in Golden State and they learned from me as well,” he stated while talking to Landon Buford.

Meanwhile, Curry, who has been a seven-time NBA All-Star, has been named the NBA Most Valuable Player (MVP) twice and has won three NBA championships with the Warriors.

Curry will look to continue the good show for Golden State Warriors in the ongoing season. Warriors will next face Cleveland Cavaliers on Thursday.