Home » Basketball » I don’t what to say about that: Frank Vogel on Anthony Davis’ ejection against Chicago Bulls

I don’t what to say about that: Frank Vogel on Anthony Davis’ ejection against Chicago Bulls 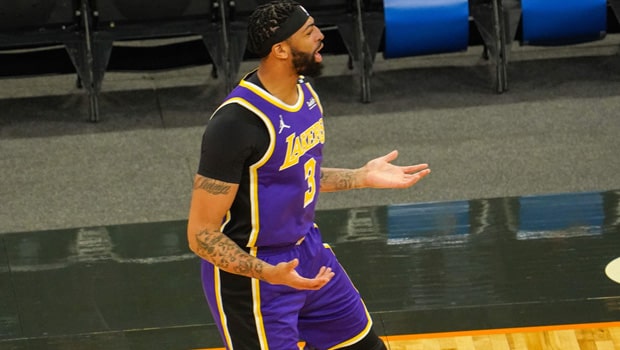 LA Lakers continued their dismal show in NBA 2021-22 season as they lost against Chicago Bulls by 121-103 on Monday night. The Lakers now have an 8-7 win-loss record and they haven’t been at their best. Things haven’t gone in the Lakers’ way and the injury woes have added salt to the injury.

Meanwhile, Anthony Davis scored 20 points and six rebounds before he was ejected by the referee Scott Wall in the third quarter. Davis had received his first technical during the halfway stage of the first quarter and then received his second when the Lakers were behind by 20 points.

Davis lost his shoe and yelled at Wall when the referee allowed Chicago Bulls to inbound the ball before the talisman could put his shoe back on. The team’s head coach was not at all impressed by the referee’s call and said he don’t know what to say about that.

“Typically the referee will let the guy get his shoe on. Quick inbound, AD said, ‘that’s BS’–which happens 15 times in every game, quick tech, ejection. I don’t know what to say about that.” Frank Vogel on Anthony Davis’ ejection versus Chicago.

On the other hand, when one of the reporters asked about LeBron James’ participation for Wednesday, Vogel said that they are taking it day by day. James hasn’t played for the Lakers since November 2 due to an abdominal strain. Vogel had earlier revealed that James is recovering well and he is expected to return back to court in the upcoming matches.

LA Lakers will look to bounce back stronger as things haven’t gone their way in the ongoing season. The Lakers will next face Milwaukee Bucks on Wednesday.