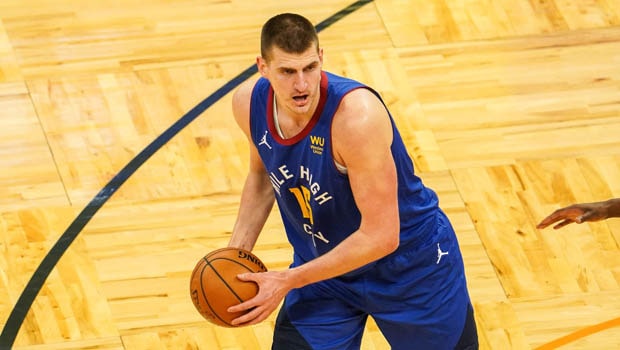 Denver Nuggets Nikola Jokic has been in sublime form in the ongoing NBA season. The veteran came up with a scintillating performance against New Orleans Pelicans and helped his team win by 138-130 in OT on Sunday night. The Serbian scored 46 points out of which 30 came in the fourth quarter (on 10-11 shooting) and overtime as he played at the top of his game.

Furthermore, the defending NBA MVP scored 12 rebounds, 11 assists, 4 blocks and 3 steals to come up with a fine performance for Denver Nuggets.

The 27-year old scored two free throws when only 3.2 seconds were left in regulation time whereas hit a match-changing three-pointer when only 1:30 were remaining in OT.

“I feel really comfortable taking important shots,” Jokic said. “I think my teammates believe in me.”

“My teammates were looking for me. I was making shots and being aggressive. Just a really good period,” Jokic said.

In fact, Denver Nuggets had a 21-point lead in the opening quarter as they were leading by 34-13 but they squandered the same as New Orleans Pelicans made a comeback. On the other hand, Aaron Gordon supported Jokic as he added 28 points and showered praise on his teammate.

“Phenomenal. Different. He’s just different,” Nuggets forward Aaron Gordon said of Jokic’s performance. “That’s just not something that you see often. He took over, 30 points in the fourth quarter and overtime; that’s just sick. That was just an amazing game. He’s an amazing ballplayer.”

“This dude is incredible,” Gordon said. “I don’t say that about a lot of people. I only say that about a handful of people. This dude is incredible. He’s the MVP. I believe that. He’s coming out night in and night out putting up ridiculous numbers, and we’re winning. I don’t know everybody that votes on it, but this guy gotta be at the top of the list.”

Meanwhile, this was the second time when Denver Nuggets and New Orleans Pelicans’ match was decided in OT this season. The Nuggets will next face Golden State Warriors on Tuesday night.