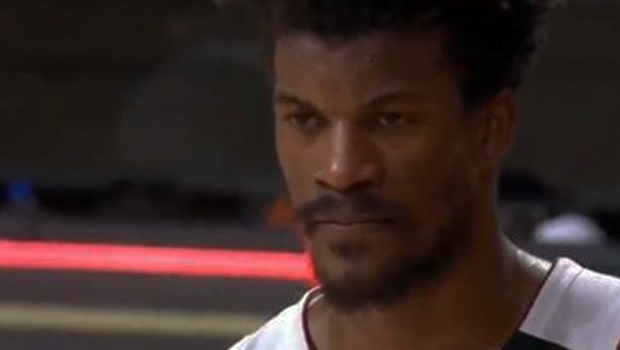 Miami Heat’s Jimmy Butler has always been instrumental in the success of his team. Butler has mostly justified his selection for the Heat and he had played a key role in taking the franchise to the NBA finals of the previous season. Butler has bagged many records for the Miami Heat with his impressive play.

The 31-year old experienced player has registered another record for the Miami Heat. Butler scored 13 points, 12 rebounds, and 11 assists to register another triple-double against the Golden State Warriors on Thursday. However, his efforts went in vain as the team lost by 120-112 in Overtime. Adebayo top-scored for the Heat with 24 points.

Meanwhile, Butler had scored 30 points, 10 rebounds, and as many assists against LA Clippers on Monday. Thus, Butler has become the first Miami Heat player to score two consecutive triple-doubles for the franchise. However, his efforts had once again gone in vain against the Clippers as the Heat had lost by 125-118.

It hasn’t been an ideal start for the Miami Heat as they have won 11 matches whereas they have lost 17 games. Hence, they are currently placed at the 11th rank in the Eastern Conference standings.

Miami Heat will want more from Jimmy Butler and Bam Abedayo in the coming matches as they will need to turn the tables. The previous season runners are expected to miss the playoff if they don’t come up with better performances in the forthcoming matches.

The Heat will look to be at their best and Butler will aim to deliver the goods in the coming matches. Miami Heat will next play Sacramento Kings on Friday.