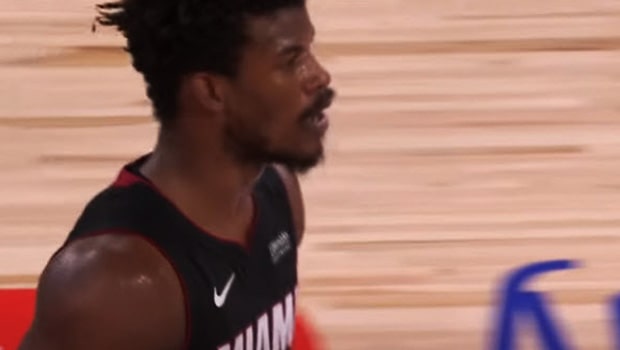 The Miami Heat had their backs against the wall in the NBA finals versus the LA Lakers. The Lakers had convincingly won the first two matches by a margin of 18 and 10 points and they were threatening to run away with the title.

The third game of the series was a crucial one for Miami Heat to stay afloat in the series. All the hopes were on Heat star performer Jimmy Butler and he was able to deliver when the team needed him the most.

Butler top scored with 40 points as Heat were able to pull one game back as they won by 115-104, making the series 2-1 in favour of the Lakers. LeBron James top scored for the Lakers with 25 points.

Furthermore, Butler grabbed 13 rebounds and provided 11 assists as he came up with an all-round game. The 31-year old shot with 70% accuracy as the Lakers defense had no answers to his onslaught.

Moreover, Butler made two blocks and as many steals to have a perfect night. Ergo, Butler has become only the third player in the NBA Finals history to register a triple double. Butler joined LeBron James who had achieved the same landmark in Game 5 of the NBA finals in 2015 while playing for the Cleveland Cavaliers against Golden State Warriors.

On the other hand, Jerry West was the first to score a triple double in the NBA finals when he scored the same for the LA Lakers in Game seven of the 1969 finals against Boston Celtics.

Meanwhile, Butler will aim to carry the same form going in the upcoming matches and he is going to hold the key for the Heat. The Game four of the series will be played on Wednesday.