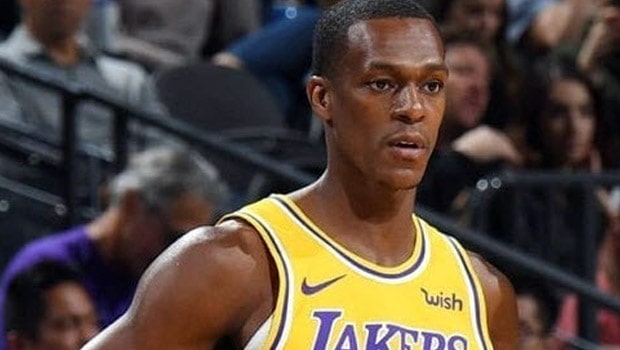 The LA Lakers could not continue their domination going against the Denver Nuggets in the third game of the Western Conference finals. After winning the first two games, the Lakers felt short by eight points in the third game. Nuggets defeated the Lakers by 114-106 with Jamal Murray stealing the show for the winners as he top scored with 28 points.

On the other hand, LeBron James was once again at his best as he top scored for the Lakers with 30 points. However, James’ efforts went in vain as the Nuggets were too strong in the end.

Meanwhile, Lakers veteran Rajon Rondo was one of the positives for the Lakers. Rondo recorded eight assists in the game, which helped him leapfrog former NBA legend and Lakers player Kobe Bryant. The Mamba had registered 1040 assists in the playoff history whereas Rondo now has 1042 assists, which helps him climb to ninth place.

Rondo’s next target will be to go past former Chicago Bulls legend Scottie Pippen’s record of 1048 assists in the NBA playoffs. Meanwhile, former legendary player Magic Johnson is at the numero uno position with 2346 assists in the postseason.

Rondo’s teammate LeBron James is in third place with 1802 assists in the NBA playoff history.

Meanwhile, Rondo didn’t have a great start to the game but he was able to make a roaring comeback against the Nuggets. In fact, the point guard had directly entered the playoffs during the conference semifinals against Houston Rockets. He had not played a single game in the bubble as he was injured before the first game in Orlando.

The Lakers would aim to bounce back in the fourth game of the Western conference finals which will be played on Friday.