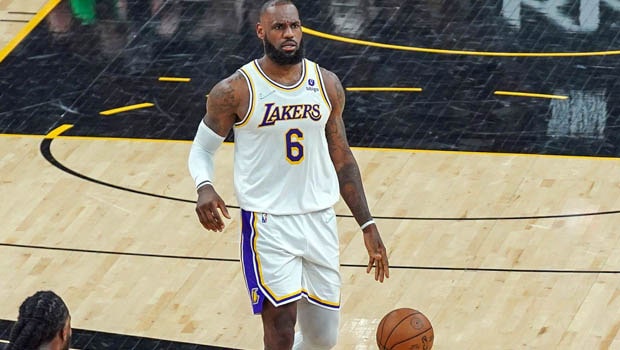 LA Lakers talisman LeBron James has continued to write his name in the record books. James has climbed the mountain of 10,000 assists and becomes the first player to reach the summit. King James scored the 10,000th dime of his career when he passed the ball to Carmelo Anthony in the second quarter against the Suns.

With it, James becomes the first player in the NBA history to reach 10,000 points, rebounds, and assists. Overall, James has scored 36,824 points (third all-time behind Kareem Abdul Jabbar and Karl Melone), 10150 rebounds, and 10004 assists in his glorious NBA career of 19 years. In fact, James is only 125 points away from leapfrogging Karl Melone’s tally of second-most points.

“To now sit alone at a statistical category in this league that I’ve really modeled my game after: being able to score, rebound and assist,” James. “I sit alone at a stat is pretty like — I’d say ‘cool,’ but it doesn’t quite make sense to me.”

“I get lost for words anytime things like this are happening to me because of where I come from,” he said. “I automatically start thinking to my hometown of Akron [Ohio] and my upbringing and where I come from and the dreams that I had of being in this league and playing at the highest level.”

James revealed that his team congratulated him after the game and he also received a message from his mother.

On the other hand, James scored 31, seven rebounds, and six assists against Phoenix Suns but his efforts went in vain as the Lakers were thrashed by 140-111.

Lakers will next face Toronto Raptors on Monday night at Crypto.com arena.