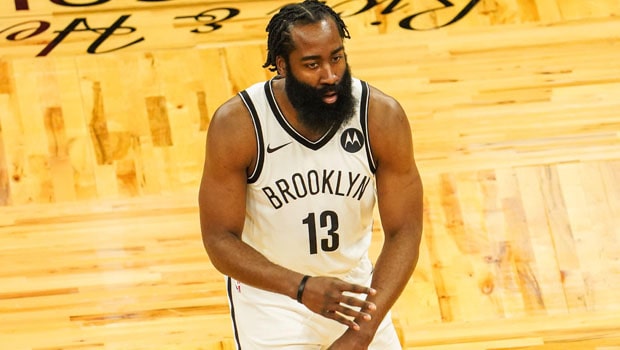 Brooklyn Nets superstar guard James Harden was forced to exit the Wednesday night game against his previous team Houston Rockets with hamstring tightness. The talisman played for 27 minutes through the first three quarters for his team before the team ruled him out for the rest of the game.

The 31-year old scored 17 points, eight rebounds and six assists as the Nets came from behind to register a win by 120-108. In fact, the Nets were in arrears by a massive margin of 18 points in the first quarter but made a solid comeback in the remainder of the game.

After the win, the team’s head coach Steve Nash expressed confidence that their main player won’t be out for a long time. The call on Harden’s availability for Thursday’s match against Charlotte Hornets will be taken before the game subject to his match fitness.

The Nets were without the services of Kevin Durant, LaMarcus Aldridge, and Landry Shamet on Wednesday night. Thus, it can be a huge blow for the franchise if James Harden is ruled out of the Thursday fixture and the coming matches.

Harden has been consistently delivering the goods for Brooklyn Nets along with Kyrie Irving and Kevin Durant and Nash will hope that Harden’s injury shouldn’t be a serious one.

Meanwhile, Harden has been in sublime form throughout the season as he is averaging 26.1 points, 11.2 assists, and 8.2 rebounds per game. Ergo, he is considered a top contender in the MVP race.

Brooklyn Nets currently occupy the numero uno place in the Eastern Conference table with a 33-15 record. The Nets will next face Charlotte Hornets on Thursday night.