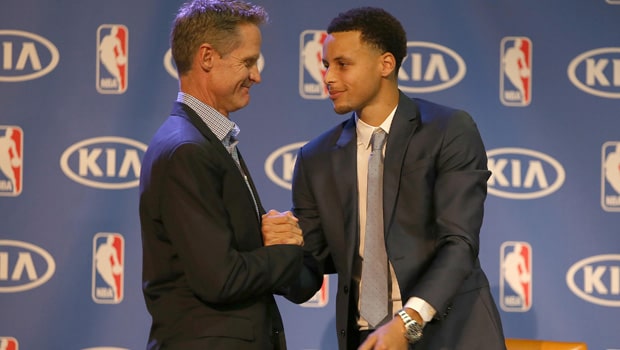 Golden State Warriors talisman Steph Curry is one of the most prolific scorers in the NBA. Many NBA boffins rate Curry as one of the best shooters in the game. Curry is known for his impeccable three-pointers and he has a great success rate in hitting the basket from a distance.

Furthermore, Curry is well known for his accuracy and he is mostly right on the money. Curry’s insane shooting abilities were on display in the All-star game between Team LeBron and Team Durant as he had scored 28 points for the former. Meanwhile, Curry also shares a great bonhomie with Warriors’ head coach Steve Kerr.

Kerr is known to get the best out of his players and Curry revealed that the coach makes every player feel important. Kerr has played with the likes of Michael Jordan and he was known for his competitiveness during his playing career. Kerr had won four NBA championships in his illustrious career as a player.

Meanwhile, Steve Kerr had taken the head coach role of Golden State Warriors back in 2014 when he had replaced Mark Jackson and since then he has done a fine job for the franchise. Kerr had led the Warriors to title wins in 2015, 2017, and 2018 and thus he is currently one of the best coaches in the NBA.

On the other hand, Golden State Warriors have won 19 matches whereas they have lost 18 games in the ongoing season. The Warriors have lost their last three matches and they will look to get back to winning ways.

Golden State Warriors will next face the LA Clippers on Friday.