Home » Basketball » This team is special, we are coming: Bradley Beal after Washington Wizards’ 11th win

This team is special, we are coming: Bradley Beal after Washington Wizards’ 11th win 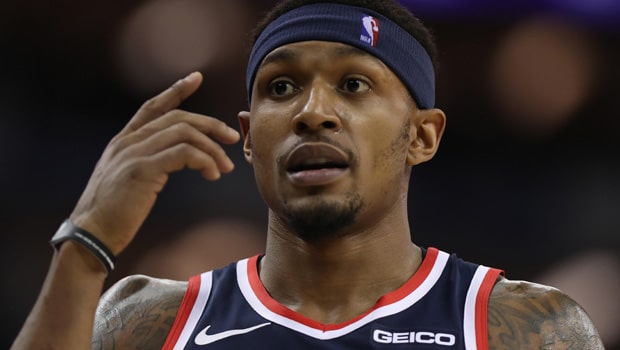 Washington Wizards continued their dream run going in the ongoing NBA 2021-22 season as they registered their 11th win by beating Miami Heat by 103-100 on Saturday night. Bradley Beal was once again instrumental in the success of the team as he top-scored with 21 points and also provided nine assists.

Wizards now have an 11-5 record and are placed at second place in the Eastern Conference standings. Beal stated that this team is special and they will try to go all the way in the league.

“We’re getting our D.C. swagger back. The fans know. They feel the energy and we feed off the energy. So please continue to support us. We gonna continue to go hard. This team is special. We coming, we coming.”

It wasn’t an easy win for the Wizards as they had lost by a margin of 15 points against the Heat in their previous match. However, they were able to come back stronger and Beal revealed that the team’s physical play helped them in their win.

“It wasn’t easy. We just stayed in the game. We know it’s a game of runs. We know how tough of a team Miami is and they sent us a message last game. They were more physical than we were. I think, what’s his name, Gabe Vincent said something after the game that we didn’t too much like. He called us soft. We kind of took it a little personal tonight. We wanted to make it a physical game because they are a physical team. We made a good run man and we closed it out.”

Beal acknowledged the collective effort of the team and lauded his teammates for their contribution to the team’s success. Along with Beal, Spencer Dinwiddie and Caldwell-Pope scored 16 points each Montrezl Harrell scored 13 points.

“Most definitely man. It was tough. I got to continue to bring the ball over, but it’s awesome to be able to have teammates that I can trust in, being able to get the ball to and for them to make plays and make shots and keep us in the game and win us this game. It was definitely big shots. Big free throws by Kuzma down the stretch. Big shots by Spence and KCP. Collectively, it was a great defensive effort.”