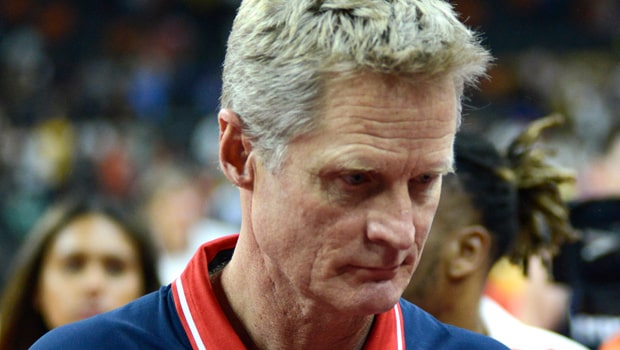 Golden State Warriors head coach Steve Kerr has expressed confidence that his team can bounce back stronger in the upcoming matches. The Dubs had a 1-5 record on the road but Kerr is hopeful that his team will be able to turn the tables in future games.

GSW is also missing the services of their talisman Steph Curry, who is expected to miss a few weeks’ action due to a left shoulder injury. The team currently has a 15-18 record in the ongoing season and they have been 3-16 on the road.

The Warriors received a blowout loss of 143-113 on Wednesday night against the Brooklyn Nets. The visitors were trailing by 91-51 at halftime as they failed to bring their best.

Kerr admitted his team was in a similar position in the previous season and they know how to dig their way out.

“The last two nights were really, really tough. We’re in the depths right now… you remember last March we lost nine of 11 games and a few months later we were celebrating the championship; so we know how to dig our way out,” Kerr said on 95.7 the Game.

On the other hand, Steve Kerr also shed light on James Wiseman’s development in the team. Wiseman scored career-high 30 points to go along with six rebounds on 12-for-14 (85.7%) shooting against the Nets.

“We’re just watching his development… We feel like he’s made strides, so it was great for him to let loose and gain some confidence,” Kerr said.

“We know he’s capable of scoring. He’s got a great touch around the basket and he’s so athletic and long that anything close to the rim he’s dunking. We know he has that capability… I thought it was a great night for him to really feel good about his progress. This is just another step in the journey for James,” Kerr continued.

GSW will next take on Memphis Grizzlies on Sunday night.