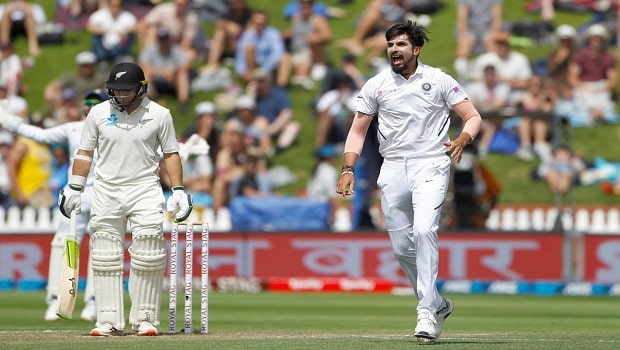 New Zealand skipper, Kane Williamson’s showed his elegance to give the team a slight edge over India on the second day of the opening Test.

Williamson was able to withstand Ishant Sharma’s lion-hearted bowling to help his country gain a slight upper-hand on Saturday.

India had another bad day on the field due to lower-order collapse, which saw them bundled out for 165. Returning from an ankle injury, Ishant took three wickets for 31 in 15 overs but couldn’t remove Williamson, who had an effortless 89 in New Zealand’s day-end score of 216 for 5, leading India by 51 runs.

Williamson was eventually removed by Mohammed Shami (1/61 in 17 overs) after he failed to check an uppish drive. Henry Nicholl, who got 17 runs from 62 balls, seemed to have hampered Williamson’s rhythm.

Ravichandran Ashwin (1/60 in 21 overs) with his superb bowling removed Nicholls with a delivery that drifted for India skipper Virat Kohli to snap the low catch at second slip.

Enroute to his effortless 89, Williamson showed his mettle with good hits and some delightful strokes square off the wicket. He also showed his class with a square drive off Jasprit Bumrah (0/62 in 18.1 overs), followed by a cover drive. He was able to hit 11 boundaries off 153 balls before his removal.

Bumrah, who had failed to get a wicket from the last three games, was punished by Williamson, who got a boundary off him. As if that was not enough, Taylor also punished another half volley through the covers from his delivery.

Black Caps took advantage of a few loose deliveries from the Indian pacers with the batting beating them in between, which contributed to some easy runs because they seized the initiative under the sunshine.

After Bumrah failed to find his length, Ishant came in and got lucky as he removed opener Tom Latham, with a delivery drifting on leg-stump.

Williamson and Taylor’s partnership that produced 93 runs was the highlight of the night before Ishant returned for his third spell.

He was able to stop the rhythm of the duo after removing Taylor from bowling that reared up from good length, which turned out to be an easy catch for Cheteshwar Pujara at short-leg.

With Nicholls in his opposit direction, Williamson’s fluent batting waned as Taylor scored only four off 34 balls as he set his site on his 22nd Test hundred, which he didn’t get.

While fielding New Zealand bowler, Kyle Jamieson marked his debut with four wickets while veteran Tim Southee did the same to fold Indian innings in 68.1 overs.

Rishabh Pant (19), who began with a six later, had a horrible mix-up with senior partner Ajinkya Rahane (46), which resulted in him being ran out.

With India at 132 for 7, Rahane got another boundary off Trent Boult as time was running out.

Southee later removed Rahane after he failed to shoulder arm a delivery. India then crossed the 150-run mark through Mohammed Shami’s entertaining

The second match will hold in Christchurch on February 29.