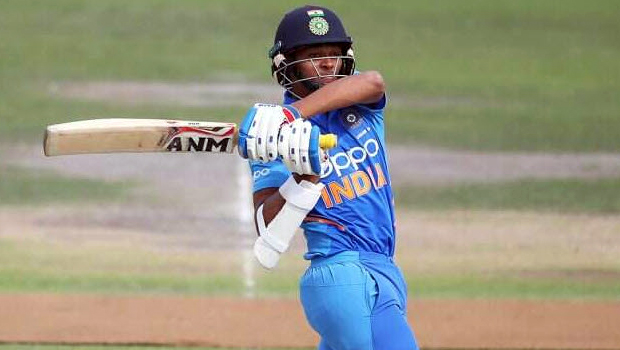 South Africa U19 did earn a consolation win in the third and final match of the 50-over series at East London but it was the Indian U19 team who ran away with the series win as they had already won the previous two matches. Almost all of the youngsters stepped up in this series for India but there were three players in particular who left a mark with their performances. Let’s have a look at them.

READ: India U19 suffer a loss in the third one-day against South Africa U19 but clinch the three-match series 2-1. 🏆

Yashasvi Jaiswal: He didn’t play the first match of the series but Jaiswal played in the next two and came up with a superb all-round performance. The 17-year-old not only registered a superb bowling spell of 3.5-0-13-4 but also played a swashbuckling innings of 89* off just 56 deliveries at the top of the order. He followed his all-round exploits with another fine bowling spell of 8-0-41-2 in the third match. Jaiswal was in superb form during the Vijay Hazare Trophy and was also snapped up by Rajasthan in the Indian T20 League auction a couple of weeks back.

#SAu19s | It’s all over at Buffalo Park. India U19s claim an eight-wicket victory to take a two-nil series lead against South Africa.

Man of the Match goes to Yashasvi Jaiswal for his 4/13 and unbeaten 88* on his 18th birthday. #SAvIND #YouthODI pic.twitter.com/J2hibB5R28

Divyansh Saxena: The top-order batsman gave the Indian team the much needed momentum in the very first match of the series. It was his unbeaten and assuring knock of 86 that helped India U19 to chase down South Africa U19’s tricky total of 187 runs. Saxena didn’t play in the next match but came up with a decent bowling spell of 4-0-18-1 in the third and final game even though he couldn’t do much with the bat.

Ravi Bishnoi: There was a lot of buzz around this leg-spinner when he was signed up by Punjab during the Indian T20 League auctions recently. Anil Kumble, former India captain and current head of cricket operations at the Punjab franchise, showed immense faith in the youngster which said a lot about his abilities. And the young spinner showed what he is capable of as he registered superb bowling figures of 3 for 36 and 2 for 20 during the first two matches of the series respectively. Bishnoi ended the series with a total of five wickets to his name at an excellent average of 11.20 and an equally good strike-rate of 18.0.