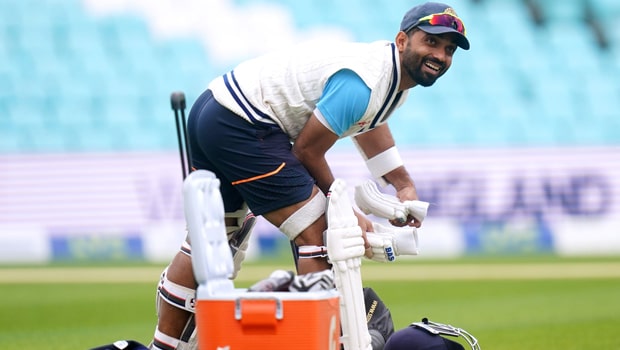 Although the Indian Test side has been on a roll this year and has scripted monumental wins in Australia and England, the form of Ajinkya Rahane, who has been a constant fixture in the XI has been a major cause of concern. The Indian Test vice-captain’s lean patch continued even in The Oval Test against England.

Across two innings in the fourth Test, he could only manage 14 runs and got out for a duck in the second innings. In 2021, he has scored 372 runs across 19 innings and has an average of 19.57. Rahane has managed just two half-centuries all year, the second of which arrived at The Lord’s. In light of this poor form, several cricket experts including Sanjay Manjrekar feel that Rahane will be extremely lucky if he’s selected in the team for the final Test against England.

The likes of Suryakumar Yadav and Hanuma Vihari are excellent reinforcements and deserve their chances as well. Citing his own example, Manjrekar said that players Rahul Dravid made their way into the team after he was dropped.

“You have an obligation to the guys waiting in the wings. That’s how you look at Indian cricket. If I wasn’t dropped, people like (Rahul) Dravid, and all those guys would not have come in,” Manjrekar said during a discussion on Sony Sports.

“Hanuma Vihari first and maybe Suryakumar Yadav. Very often you are surprised by players who are out in the reserves because you haven’t seen them and Ajinkya Rahane is not exuding confidence,” he added.

Ajinkya Rahane was the highest scorer in the World Test Championship 2019-21 and scored 1159 runs in 18 matches. However, all of that is behind him now and his form over the last year has not assured confidence. He has managed just 109 runs across four Tests in England so far and has struggled a lot.

“It’s not like when you give him more opportunities, he is starting to look better. The most worrying thing is that he gets an innings which you think will trigger him back into form but that never happens. So, he will be very lucky if he gets one,” the former cricketer added.