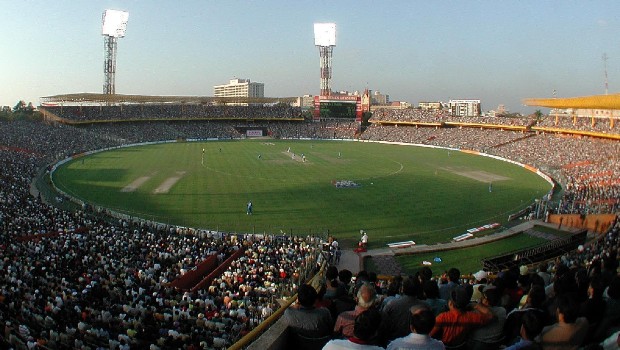 We can all agree that India loves cricket, the most popular sport in the country by far. India has 49 international cricket grounds, some of these venues being the best cricket stadiums in the world – considering their quality and seating capacity.

To get an idea, India has 5 of the 10 largest and best cricket stadiums in the world. We’ve listed them so you can get to know more about each stadium and its history.

Get to know all about Cricket with our special Cricket page in DafaNews: see some cricket facts and our online cricket betting tips.

Here are the five best International Cricket Grounds in India:

Located in Motera, Ahmedabad, the Sardar Patel Stadium is one of the premier cricket stadiums of India. It was built in 1982 and was first renovated in 2006, ahead of the Champions Trophy. After that, it became the regular venue for international matches in the city. In 2015 it was demolished to be completely rebuilt. Now it is spread over 63 acres with a seating capacity of 110,000 and it’s the largest cricket stadium in the world.

The Sardar Patel Stadium is owned by the Gujarat Cricket Association and is a venue for Test, ODI, and T20I cricket matches. Since the beginning, it has hosted matches during the Cricket World Cups in 1987, 1996, and 2011. Its first Test match was hosted in November 1983 and since then the stadium has some memorable cricket features, like when Sunil Gavaskar got to his 10,000 Test runs in 1986-87, or when, seven years later than that, Kapil Dev got past Richard Hadlee as Test cricket leading wicket-taker.

Eden Gardens is a cricket ground in Kolkata. It is the oldest and the second-largest cricket stadium in India. It was built in 1984 and has hosted around 15 Cricket World Cup matches and many other international games, like the 1987 ODI CWC, the 2016 ICC World Twenty and the 2016 Women’s T20I. In 1987, it became the second stadium to host a World Cup final.

Before the 1987 World Cup renovation, the stadium had a capacity of 40,000 seats. It was then expanded to 94,000. To meet the standards set by the International Cricket Council (ICC) for the 2011 World Cup, the stadium underwent renovation again and had a reduction of the seating capacity to about 68,000.

Eden Gardens is a venue for Test, ODI and T20I matches of the India National Cricket Team. It is also the home venue of the Bengal cricket team and the IPL franchise cricket team Kolkata Knight Riders. It is known to have the fastest outfield among all the cricket stadiums in India and it is called the “Mecca of Indian cricket” since it was the first officially built cricket ground in India.

The stadium is named after Veer Narayan Singh Binjhwar, a landlord from Sonakhan who spearheaded the 1857 war Indian independence in Chhattisgarh. In 2013, the stadium was declared the second home for the Delhi Daredevils in the Indian Premier League (IPL) and since then has hosted many of the team’s matches.

The Rajiv Gandhi International Cricket Stadium was built in 2004 and is spread across 63 acres in Hyderabad, Telangana, with a 55,000 seating capacity. It is the home ground of Sunrisers Hyderabad IPL team and Hyderabad Cricket Association.

The stadium has a rather very curious fact tied to its name: the home team has never actually won a match there. Also, it has hosted three ODI’s and a test match, but India lost all three ODI’s and the test match was drawn. Apart from these records, the final matches of 2017 and 2019 Indian Premier League were held in the stadium.

Based in Chennai, the M.A Chidambaram Stadium is the oldest cricket stadium in India after Eden Gardens in Kolkata. It is also the home ground for the Indian Premier League team Chennai Super Kings and the Tamil Nadu cricket team. It was established in 1916 and named after the former President of BCCI, but it is also nicknamed as the Chepauk stadium.

Its first Test match was hosted in February 1934, and two years later it hosted the first-ever Ranji Trophy match, apart from being the ground of the Indian cricket team’s first-ever test victory in 1952 against England. Also, the match between India and Australia in 1986 was the second ever Tied Test in the history of the game.

Now that you know all about the main Cricket Stadiums in India, check if you are a true cricket fan by taking our cricket trivia quizzes. You can also keep reading about the sport and check out the most curious cricket facts.