Home » Cricket » Ashes: Feel like I could have had a positive influence on a pitch like that, says Stuart Broad

Ashes: Feel like I could have had a positive influence on a pitch like that, says Stuart Broad 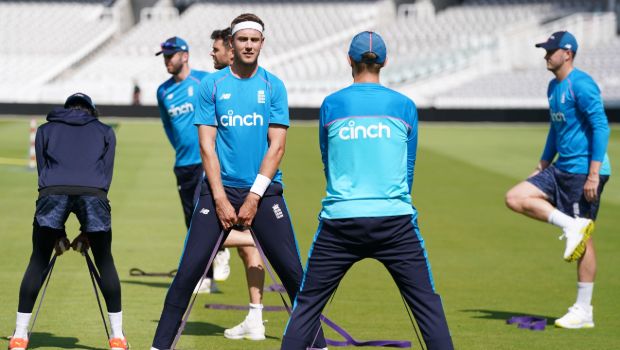 England’s veteran fast bowler Stuart Broad rued the fact that he could have had a positive influence on the Gabba pitch in the first Ashes Test match against Australia, which the tourists lost by nine wickets.

Broad has all the experience under his belt but he was surprisingly not picked in the first Test match along with James Anderson, who had a calf issue and the team didn’t want to risk him.

However, Broad was named in the 12-man squad but he was not included in the starting XI. England picked fast bowlers like Chris Woakes, Mark Wood, and Ollie Robinson. When England skipper Joe Root was asked about the exclusion of Stuart Broad and James Anderson, he stated that they wanted variety in their bowling attack. Furthermore, Root added that they were able to grab their chances in the field, which led to their downfall in the first Test match.

There was a lot of assistance for the fast bowler on the Gabba pitch as the track was green. Thus, it was surprising to note that the visitors decided to leave out their experienced fast bowlers. Moreover, Broad had his wood on David Warner in the previous Ashes series and the southpaw went on to score a crucial knock of 94 runs in the opening Test.

Stuart Broad wrote in his column in Daily Mail, “I’ve been left out on numerous occasions, and sometimes it comes as a real surprise. This was less of a surprise, maybe because I wasn’t in the team for the previous series against India due to a calf injury. People were suggesting I’d been dropped but that is factually incorrect.”

“It would be wrong in this scenario to kick up a stink. On the flip side, I love Ashes cricket, love bowling at the Gabba, and feel like I could’ve had a positive influence on a pitch like that.”

England went on to lose the first Test match by nine wickets and Australia has taken a crucial 1-0 lead to draw first blood in the series. Broad added that the tourists must pretend that it’s 0-0 in a four-match Test series and should make a fresh start in the second Test match, which will be played at Adelaide.

“There is no time to feel sorry for ourselves, dwell on not batting, bowling, or catching very well. We know that’s the case. More importantly, what specifically can we channel positively into Adelaide? What we mustn’t do is carry negatives with us for the next month.”

“We’ve done that on Ashes tours past and consistently lost. We must pretend it’s 0-0 in a four-match series and go again. Timing is very important in floodlit Test matches. Conditions change very quickly in certain periods, so you have to recognize them and adapt.”