Ashes: Need 2 to 3 batters to be heroic – Stuart Broad believes England can save second Test 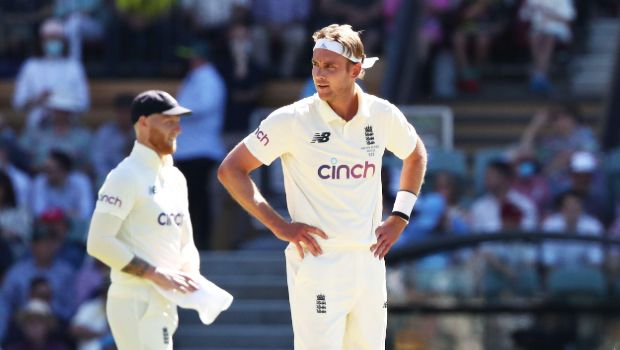 England is behind the eight ball in the ongoing second Ashes Test match against Australia. The tourists have been set a huge target of 468 runs after Australia decided to declare their second innings at 230-9.

Australia had taken a huge lead of 237 runs after the first innings as England was skittled for 236 runs following the hosts scored 473.

England is currently 70-3 and they need another 398 runs while the home side needs another seven more wickets to take a 2-0 lead in the series. Thus, the hosts have put their noses in front and England will need to bat out of their skin to save the second Test match.

The onus will be England skipper Joe Root, who has been in sensational form in 2021. However, it is not going to be easy for England to save the Test match on the final day of the Test match.

In his column for the Daily Mail, Broad wrote: “Now, we need to hold the game as long as possible — although the ball is turning, it’s not misbehaving for the seamers in the slightest, so can we bat four sessions? Absolutely. Can we save it? Yes. We just need two or three batters to be heroic.”

Broad admitted that Australia has dominated the ongoing series and it will be a long way back for England if they go on to concede a 2-0 lead in the five-match series.

“It would be a long way back from 2-0 down when we need to win the series to reclaim the urn and we haven’t fired with bat or ball yet. We’ve collapsed three times and Australia have scored 400 twice. We need to change things pretty quickly.”

Meanwhile, Pat Cummins was ruled out of the second Test match due to the Covid-19 scare. Broad added that it could have been the 2005 Ashes moment for England when Glenn McGrath was ruled out due to injury had England batted first at Adelaide.

“I thought Pat Cummins being ruled out of the second Test through pandemic protocols had the potential to be the Glenn McGrath 2005 moment of this Ashes. One-nil down, the opposition’s best bowler misses the game in freak circumstances. But for similarities to McGrath standing on the ball at Edgbaston 16 years ago to be retained, we had to bat first.”

Meanwhile, Stuart Broad returned with figures of 1-73 and 1-27 in the first and second innings respectively.