Home » Cricket » Ashes: That’s the best I have ever seen him bowl – Steve Smith on Mitchell Starc

Ashes: That’s the best I have ever seen him bowl – Steve Smith on Mitchell Starc 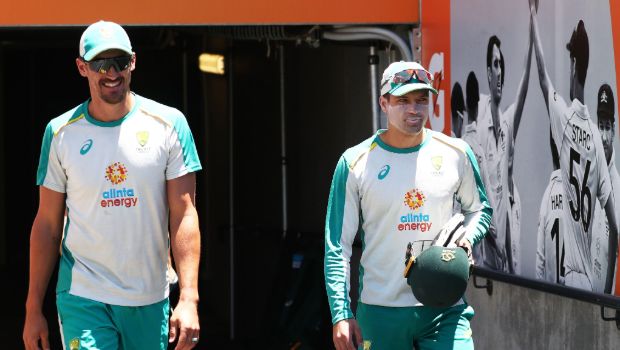 Australia’s standing captain Steve Smith has showered praise on the team’s gun fast bowler Mitchell Starc after they defeated England by a gargantuan margin of 275 runs at Adelaide in a pink-ball Test match to take a 2-0 lead in the five-match Ashes series.

Starc was the leader of the pack in the absence of full-time skipper Pat Cummins and experienced fast bowler Josh Hazlewood.

Smith said that it is the best he has ever seen Starc bowl in the recent past. The left-arm fast bowler scalped four wickets in the first innings and played a key role in folding England on a paltry score of 236 runs. The fast bowler returned with figures of 4-37 in the first essay and then snared two wickets in the second dig despite having a troubled back.

In fact, Starc’s place in the final XI was questioned by a lot of cricket boffins ahead of the first Ashes Test at the Gabba, Brisbane. Starc had scalped a total of three wickets in the opening Test match and had accounted for Rory Burns on the first ball of the series.

“I think that’s the best I’ve seen him bowl in a while. They all bowled exceptionally well as a group, led by Mitchell Starc,” Smith said.

“Mitch led the attack really well. He summed it up quickly. Not a great deal of swing so he bashed a good length, across the right-handers, at a great pace.

“I’m really proud of how he went about his business. “Mitch is an exceptional bowler, he has been for a long time. Look at his strike rate, he’s up there with some of the best in the world,” he added.

Meanwhile, Mitchell Starc has scalped 264 wickets in 63 Test matches at an average of 27.36. Australia will hope that Starc recovers for the Boxing Day Test match as he felt discomfort in his back while batting in the second innings.

On the other hand, Jhye Richardson had bagged a five-wicket haul in the second innings and he will be expected to play if Starc is ruled out. Cricket Australia has also added Scott Boland to their Ashes squad.

The third Ashes Test match will be played at the MCG from December 26.