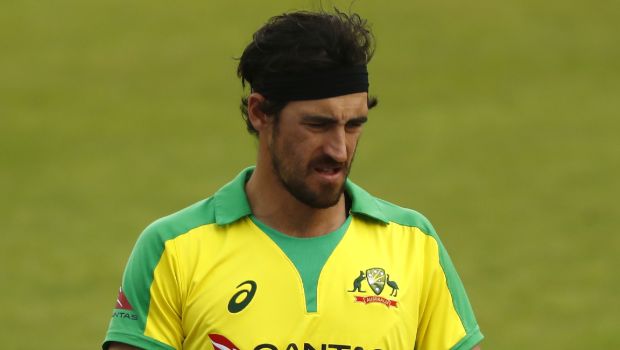 Australia’s limited overs skipper Aaron Finch has put his weight behind under-fire Mitchell Starc, who hasn’t been in the best of forms in the recent past.

Starc has failed to create any kind of impact and he has been on the expensive side. The lanky fast bowler has scalped a solitary wicket in the two ODIs against India at an average of 147 and a high economy rate of 8.17.

The left-arm pacer who has been Australia’s lead fast bowler in the white-ball format, has been wayward in his line and length and has failed to hit the right areas. Starc had scalped 27 wickets in 10 matches in 2019 at an impressive average of 18.59 and economy rate of 5.43.

However, Starc’s numbers in 2020 are not at all encouraging as he has snared 12 wickets in 11 matches at an average of 54.25 and economy rate of 6.28. Thus, these are worrying signs for Australia but Finch is confident that Starc will soon get back to his best.

Aaron Finch said, “I think he’s going OK. He hasn’t been at his very best and you have to understand that his standards are a lot higher than what you expect from most other people because of how dominant he’s been the last eight, nine years — especially in the white-ball formats.”

Finch believes there is no need to hit the panic buttons as far as performances of Mitchell Starc is concerned. The Australian captain feels the gun fast bowler will soon get back into form.

“There will be some conversations today about what we can do slightly differently, whether it’s a tactical thing, when we’re using him through the innings. But there’s definitely no panic stations from my point of view.”

There is no doubt that Mitchell Starc is a quality bowler and it is a matter of time before we once again see him at his absolute best. Starc will like to improve his performances and come back strong against India in the third and final ODI.

Australia has already sealed the three-match series 2-0 and they will look to whitewash the visitors. The third ODI will take place at Manuka Oval, Canberra on December 22.