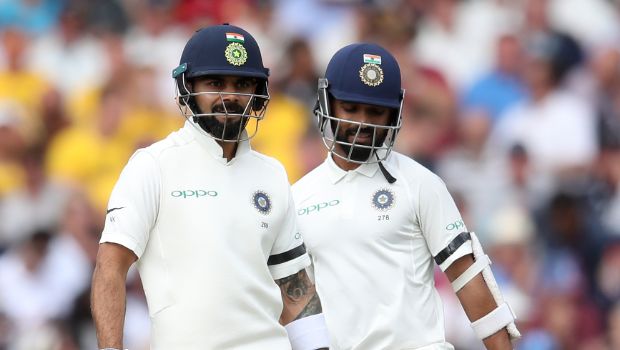 Rahane is known to play the game in the right spirit like Rahul Dravid and he has a lot similarities with Dravid. In fact, Rahane conducts himself on the field in the same way as Dravid used to do.

The right-hander is a pure gentleman and plays the game in the right spirit. Rahane has many times stated that Dravid is his idol and there are a lot in common between the two.

Meanwhile, Brad Hodge observed both Rahul Dravid and Ajinkya Rahane from close corners while playing for Rajasthan Royals in the Indian Premier League.

Rahane will lead the Indian team in the absence of Virat Kohli in the last three Test matches. The visitors lost the first Test match by eight wickets after they were skittled out for only 36 runs in the second inning at Adelaide.

Thus, Rahane will need to lead with aplomb in Kohli’s absence and he will need to lift the team after an ignominious defeat. The right-hander should also bat at number four according to a number of cricket pundits.

“He (Rahane) is very true, very loyal, very honest, a nice guy to spend some time around, and is very much and I don’t know whether this is coincidence or not the mirror image of Rahul Dravid,” Hodge was quoted as saying by Sydney Morning Herald. “Both have got great qualities, they are happy to communicate with everyone, spend time with all different walks of life. He is well balanced, not ego-centric and loves cricket.”

“Long before that, what I knew of him was he was a very gentle individual anyway. Just well-mannered, kind, well spoken, just a nice person to spend time with. He has good credentials to skipper a team, for sure,” he added.

Meanwhile, Rahane has led in two Test matches and the team has won on both occasions. In fact, Rahane had led in the all-important decider against Australia in the Border-Gavaskar Trophy back in 2017. Rahane had taken his team to victory as he had led aggressively.

Rahane will like to get the best out of his players and it would be interesting to note how he will motivate his troops to come back stronger.