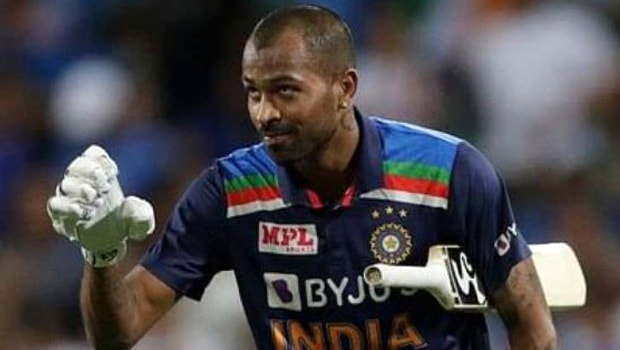 India’s talisman all-rounder Hardik Pandya’s blistering unbeaten knock of 42 runs from 22 balls and fifty from Shikhar Dhawan helped India chase down 195 with six wickets in hand to win the three-match T20I series against Australia at Sydney Cricket Ground on Sunday, with a match to spare. Virat Kohli decided to bowl first after winning the toss and Australia posted 194 after a fifty from Matthew Wade.

When all the Indian bowlers took a stick by the Australian batters, it was T Natarajan who came good. The left-arm seamer first dismissed D’Arcy Short with a short delivery and then got the wicket of well-settled Moises Henriques. Natarajan conceded only 20 runs in his quota of four overs and played an instrumental role in keeping Australia below 200.

Australia’s standing captain Matthew Wade gave a perfect start to the team as he was able to hit the ground running. Wade took the attack on the Indian bowlers and made great use of the powerplay overs to bring up his fifty off just 25 balls.

However, Wade’s knock ended when he turned his back on Steve Smith, thinking he was being caught by Virat Kohli. But the Indian captain had a mess of a simple chance however he made sure he ran out Wade.

Steve Smith had some trouble while getting his timing right against the slower balls as he scored 46 runs from 38 balls. Glenn Maxwell once again looked threatening but he was well disguised by a slower delivery from Shardul Thakur.

On the other hand, India got off to a slow start in their first 15 deliveries. However, a no-ball from Andrew Tye opened the floodgates for the team as Dhawan and KL Rahul found the boundaries on regular intervals. Rahul was dismissed after getting off to a start whereas Dhawan got back into form with a well-made fifty.

However, Dhawan was dismissed soon after reaching his personal milestone whereas Kohli looked good during his 24-ball 40 run knock. Kohli also played an uncharacteristic ramp shot for a six, which would have made his good friend AB de Villiers proud. Sanju Samson got off to another promising start but threw away his wicket.

Hardik Pandya and Shreyas Iyer were then left with the task of getting 37 runs in the last three overs. Pandya missed a few opportunities but backed himself to clear the ropes. Iyer also helped as he eased off the pressure with a six and a four in the penultimate over. 14 runs were needed in the final and Pandya struck two maximums to get India over the line.