Home » Cricket » Aus vs Ind 2020: He is a X-Factor – Nathan Lyon hopeful David Warner will play next two Tests

Aus vs Ind 2020: He is a X-Factor – Nathan Lyon hopeful David Warner will play next two Tests 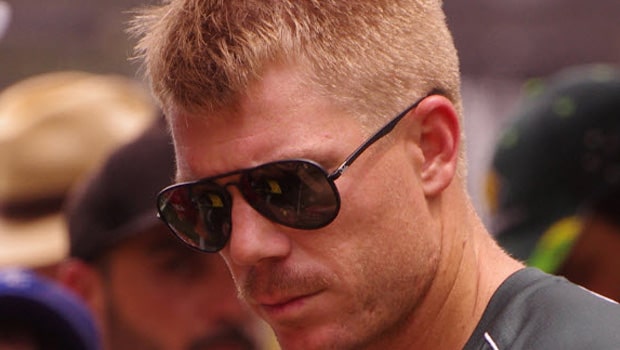 Australia’s veteran spinner Nathan Lyon is hopeful that their talisman batsman David Warner will play the next two Test matches. Warner had recently revealed that he is yet to achieve 100% fitness but he is hopeful of making the cut into the final XI for the third Test match.

Lyon stated that Warner could be a X-factor in Australia’s batting line-up as he can take the game away from the opposition with his blistering batting. There is no doubt that Australia have missed Warner in the first two Test matches. Warner had suffered a groin injury in the second ODI against India.

Furthermore, Australia’s talisman batsman Steve Smith isn’t in the best of forms as he has only scored 10 runs in the first two Test matches at a paltry average of 3.33. Moreover, the rest of Australia’s batting has failed to deliver the goods and they have been put under pressure by the Indian bowling.

Consequently, the arrival of David Warner will bring a lot of confidence to the team. Warner has all the experience under his belt and he has a brilliant record in the home conditions. Thus, the left-hander will look to give his best if he plays in the third Test match.

“One hundred percent. I think David is an X-factor. He is a world-class batter, we all know that, so I am 100 percent expecting David to go out there in the next couple of Test matches and do well. Obviously, he’s got all of the support of the Australian changing room and everyone else around the world to come in here and do well. So, I’m looking forward to getting Davey back up to the top order for Australia,” said Lyon.

With Joe Burns dropped from the Australian squad, David Warner might open the innings with youngster Will Pucovski. However, it would be interesting to note Australia’s opening combination as Matthew Wade has also done a decent job in the Test series . Wade can be dropped in the middle order whereas Travis Head, who has been out of form could be dropped from the playing XI.