Home » Cricket » Aus vs Ind 2020: I thought T Natarajan would have been the man of the match – Hardik Pandya

Aus vs Ind 2020: I thought T Natarajan would have been the man of the match – Hardik Pandya 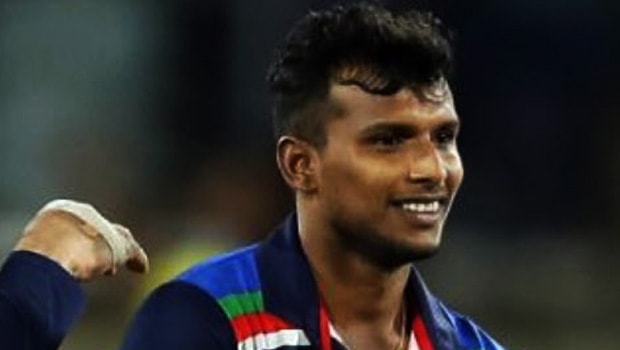 India’s all-rounder Hardik Pandya believes T Natarajan was a more deserving Man of the match than him after the second T20I against Australia at the Sydney Cricket Ground on Sunday, which the visitors ended up winning by six wickets. Pandya was adjudged the Man of the match for his blistering knock of unbeaten 42 runs from 22 balls, which he scored with the help of three fours and two sixes.

However, Natarajan played a crucial role in keeping Australia below the 200-run mark as he scalped two wickets and conceded his runs at only five runs/over to give away 20 runs in his four overs. Natarajan got the wicket of D’Arcy Short with the bouncer and then also dismissed Moises Henriques in the death overs.

Thus, Natarajan was the pick of the Indian bowlers when the others took a beating by Australian batsmen. In fact, all the Indians bowlers conceded their runs at an economy of more than eight but only Natarajan was an exception as he kept a tight grip on the proceedings with the help of his variations.

Natarajan was playing his third International game and it was great to note his execution when he was under the pump.

Hardik Pandya said in the post-match presentation, “They were batting really well and we wanted to be positive and special mention to Natarajan as well. I thought he should be the Man of the Match, because the bowlers struggled here and he had a really good game”.

On the other hand, Pandya had missed some balls and couldn’t make a decent connection. However, the combative batsman was confident that he would be able to take his team over the line as he had the belief in his power-hitting skills.

Pandya added, “It’s very simple. I like to look at the scoreboard and play so that I know which bowlers to target. I have been in these situations many times and I learnt from my mistakes in the past. My game is always around the confidence which I carry, it has that fine line where I back myself and not become overconfident. I always remember all those times when we chased big totals and it helps”.

Meanwhile, Pandya has been brilliant as a batsman in both the white-ball series against Australia and he will look to continue his good form. Pandya had scored 210 runs in the ODI series and played a match-winning knock in the second T20I.

The final T20I will take place at the same venue of SCG on Tuesday.