Home » Cricket » Aus vs Ind 2020: It was a surreal experience to represent the country – T Natarajan

Aus vs Ind 2020: It was a surreal experience to represent the country – T Natarajan 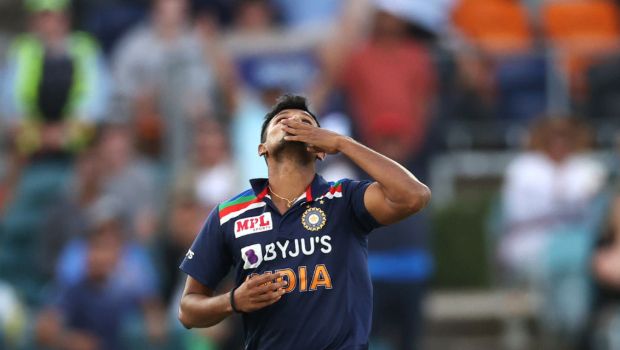 India’s rookie fast bowler T Natarajan felt ‘surreal’ after making his ODI debut for the Indian team after playing in the third ODI against Australia at Manuka Oval on Wednesday.

Natarajan has earned his place in the T20I squad after impressive performances in the 13th edition of the Indian Premier League.

The left-arm fast bowler had replaced Varun Chakravarthy in the T20I squad after the mystery spinner was ruled out due to shoulder injury. However, Natarajan was added to the ODI squad after fast bowler Navdeep Saini had complained of back spasm just hours before the first ODI.

Meanwhile, it has been an inspirational story for T Natarajan, whose life changed after an impressive season in the TNPL. Subsequently, he was roped in by Kings XI Punjab but didn’t get a lot of opportunities.

He was then bagged by Sunrisers Hyderabad and had a perfect season for them in IPL 2020. The southpaw pacer scalped 16 wickets in as many matches and impressed with his ability to consistently hit the block hole.

In fact, Natarajan started playing with the hard ball when he was 20 and he comes from a humble background. Thus, he has been able to reap fruits for the hard work he has done.

On the other hand, Natarajan had a good debut for the national team as he scalped two wickets and conceded 70 runs. The left-arm seamer provided a perfect start to the team as he got the wicket of Marnus Labuschagne and ended India’s drought of wickets in the powerplay overs.

Meanwhile, Natarajan has also shown skills to deliver the goods when he was under the pump. Glenn Maxwell smashed the fast bowler to 18 runs in the 44th over of the innings. However, the 29-year old made a fine comeback and conceded only eight runs in his last two overs. Furthermore, he accounted for Ashton Agar’s wicket.

“It was a surreal experience to represent the country. Thanks to everyone for your wishes. Looking forward to more challenges”, tweeted Natarajan.