Aus vs Ind 2020: Mohammed Shami ruled out of remaining Australia Tests due to fractured arm 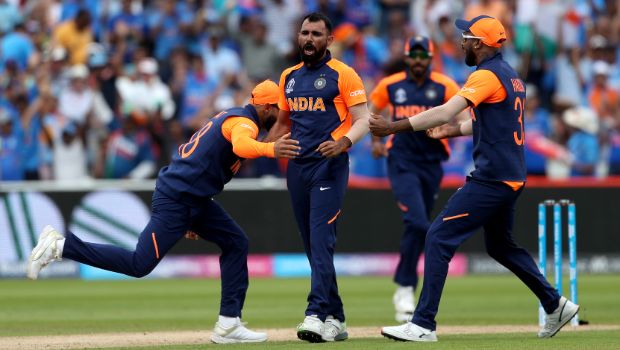 After an ignominious defeat at the Adelaide Oval, the Indian team has suffered a huge blow as their lead pacer Mohammed Shami has ruled out of the remaining three Test matches against Australia due to a fractured arm.

Shami was hit on his wrist by a bouncer from Pat Cummins in the second innings and he was seen in a lot of pain after suffering the blow.

Thus, Shami couldn’t take the field in the second innings. Indian skipper Virat Kohli had also confirmed that Shami is in a lot of pain and he could hardly lift his hand. The right-arm fast bowler had gone wicketless in the first innings of the Adelaide Test but he didn’t have luck on his side as he had bowled well.

In fact, Shami had played a crucial role in India’s previous Test series triumph as he had scalped 16 wickets in the four Test matches. Furthermore, Shami has the experience under his belt and he would have held the key in Ishant Sharma’s absence.

Meanwhile, India has three potential replacements for Shami, who are available with the team. There is Shardul Thakur, who had made his Test debut against West Indies but could only bowl 10 balls. T Natarajan had also impressed in the limited overs format as he made a perfect debut and he is helping the team in the nets.

Kartik Tyagi is the third pacer who had played the first warm-up match against Australia A. Tyagi had impressed with his bouncers and he had also hit Will Pucovski on the helmet. However, Mohammed Siraj, who has impressed in first-class cricket, is expected to make his debut in the second Test match at the MCG.

Meanwhile, in the absence of Mohammed Shami, the pressure to deliver the goods will fall on the shoulders of Jasprit Bumrah. The second Test match will take place at the MCG from December 26.