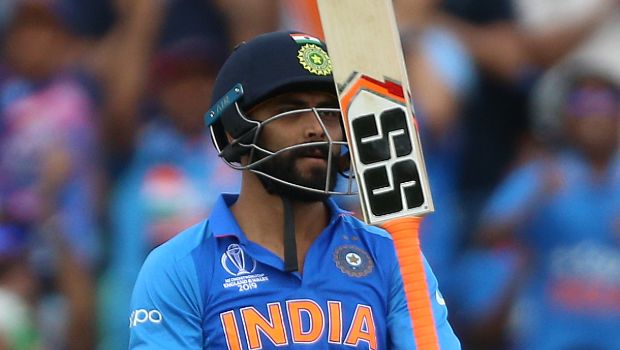 There was a lot of controversy regarding concussion substitute for Ravindra Jadeja when the all-rounder was replaced with leg-spinner Yuzvendra Chahal.

Many questioned how Chahal is a like for like replacement for Jadeja as the former is a mainstream spinner whereas the latter is an all-rounder.

Furthermore, no Indian physio and doctor had attended Jadeja as soon as he was hit on the helmet on the second ball of the final over. Jadeja kept batting and scored nine more runs in the last over after he was hit. The left-hander scored a blistering knock of 44 runs off just 23 balls and helped his team post 161 runs on the board.

However, the team India’s official refused the claim of tactical concussion substitute and revealed the turn of events. The official revealed that Sanju Samson noticed Jadeja’s condition and then informed Mayank Agarwal, who told the team’s doctor.

In fact, Jadeja had also suffered a hamstring injury before he was hit on the head by a bumper from Mitchell Starc.

“Sanju (Samson) was the first one to see it. He immediately informed Mayank (Agarwal), who was seated next to him, that the blow was flush on the helmet. And Mayank then ran up to inform the team management,” Cricbuzz quoted a senior team official as saying.

“We immediately called for the team doctor and he started icing Jadeja’s head and neck. We were quite worried. But even after a while he told us he was feeling groggy.”

“At that point, we didn’t even focus on his hamstring. It was all about ensuring that he got immediate help. We now know all about head trauma injuries and how dangerous it can be. Our focus was to purely make sure he’s feeling better. And once the doctor had assessed him, we felt like we had no choice but to consult David Boon regarding the protocols for getting a concussion substitute,” the official said.

“It’s quite ridiculous that someone would think we would use one of our batsmen getting hit on the head as a tactic for anything.”

Meanwhile, as a result of the concussion, Ravindra Jadeja was ruled out of the last T20Is. Furthermore, Jadeja is now a doubtful starter for the first Test match against Australia. On the other hand, Yuzvendra Chahal went on to scalp three wickets and bagged Man of the match award, which added salt to the injury for the Australian team.

India has already bagged the T20I series as they have taken an impregnable lead of 2-0 and the final T20I will take place at SCG on Tuesday.