Home » Cricket » Aus vs Ind 2020: T Natarajan was the only bowler who won hearts – Aakash Chopra

Aus vs Ind 2020: T Natarajan was the only bowler who won hearts – Aakash Chopra 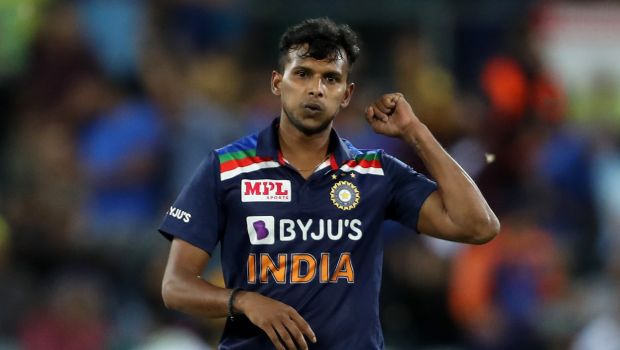 Former Indian opener and now cricket commentator Aakash Chopra stated T Natarajan was the only bowler who won hearts after the second T20I against Australia at Sydney Cricket Ground on Sunday.

Natarajan played an instrumental role in India’s six-wicket win, which helped the visitors in sealing the three-match series.

The left-arm pacer dismissed D’Arcy Short with a short pitched delivery whereas he also accounted for Moises Henriques in the death overs. The rookie fast bowler scalped these two wickets and conceded only 20 runs in his four overs quota.

Furthermore, it is great to see that Natarajan has delivered the goods despite not having experience under his belt. The 29-year old has shown the promise to go a long way in his career and he is on the right track. Chopra added that Natarajan was the biggest positive from the second match.

Aakash Chopra said on his YouTube channel, “T Natarajan was the only bowler who won hearts. It was just his second T20I match and third overall international encounter and how well he bowled. He was given one over each in four spells, he took wickets and was economical as well.”

“The bowlers got hit so much that we will remember Natarajan’s spell for a long time. He was looking different from all the other bowlers. He is the biggest positive from this match.”

In fact, Australia was looking all set to go past the 200-run mark and it was Natarajan’s accurate bowling which helped the visitors in keeping the hosts in check.

Natarajan also had a good first match as he scalped three wickets and conceded 30 runs in his four overs. The left-arm pacer will look to continue the good show and he has been the find of this tour for the Indian team.

The final T20I will take place at the same venue of the SCG on Tuesday.