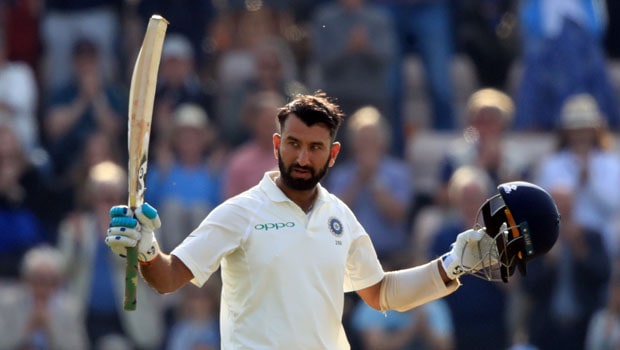 India’s number three batsman Cheteshwar Pujara has been the rock of the team’s batting line-up. Pujara has produced great numbers while playing against Australia as he has scored 1893 runs in 20 Test matches at an impressive average of 54.08. Pujara scored 405 runs in four Test matches against Australia in 2017 whereas he top-scored with 521 runs on the 2018-19 tour.

One of the key reasons for Pujara’s success against Australia is the fact that he has been able to keep Nathan Lyon at bay. It is mostly noticed that Pujara makes good use of his feet against Lyon and tries to unsettle him by getting to the pitch of the ball. Pujara also uses his pad when he prances down the wicket against Lyon.

Pujara has shed light on his rivalry against Lyon and revealed that it was former Indian team coach Anil Kumble’s tactics that helped him tackle the Australian veteran off-spinner better.

“I also got a text from Anil Bhai (Kumble) because I was in touch with him. He told me ‘you have to play in a certain manner’. The gameplan which he told me in 2017 has been helping me play well against Nathan Lyon,” said Pujara while talking to Sports Today.

On the other hand, Pujara added that he also discussed the same with current coach Ravi Shastri and he received positive feedback from him. Pujara scored 271 runs in the four-Test matches at an average of 33.88 in the recently concluded Test series against Australia.

Pujara has been doing a fine job for the Indian team in the Test fold and he would look to continue the same. The right-hander will be seen in action in the upcoming four-match Test series against England. The first Test match begins on the 5th of February in Chennai.