Home » Cricket » Aus vs Ind 2021: I let the pressure get to me – Tim Paine apologies for misbehaviour at SCG

Aus vs Ind 2021: I let the pressure get to me – Tim Paine apologies for misbehaviour at SCG 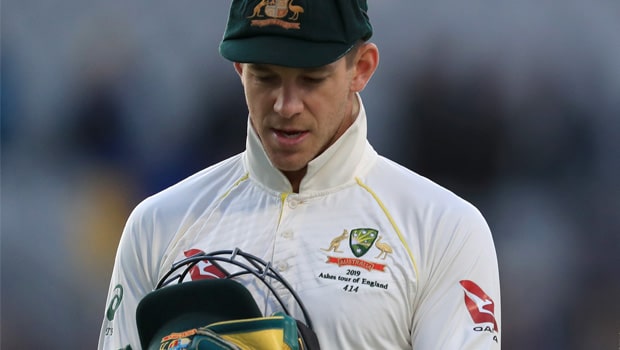 Australia’s skipper Tim Paine has apologised for his misbehaviour on the final day of the third Test match at the Sydney Cricket Ground against India. Paine continuously tried to get under the skin of India’s off-spinner Ravichandran Ashwin to disturb his concentration while saving the match for his team.

Paine was even heard calling Ashwin a d******* during the innings. Furthermore, Paine was heard saying on the stump mic, ‘Just get on with it’, when Ashwin and Vihari were taking their time to put on the chest guard.

Paine admitted that he let the pressure of the game get to him and apologised for his behaviour. In fact, the wicket-keeper had a tough day behind the stumps as he dropped Rishabh Pant twice on three and 56. Furthermore, Paine could not hang on to his chance when Mitchell Starc produced the outside edge of Hanuma Vihari’s bat when few overs were left on the final day.

“My leadership wasn’t good enough, I let the pressure of the game get to me, it affected my mood and then from there affected my performance. Yesterday when I came off the ground my reflection was purely on my wicketkeeping. Sitting back last night and reflecting on the whole game, I think I said to our players yesterday I’ve had a really poor game as a leader, not so much as a captain but certainly as a leader.

“I’m a captain who wants to enjoy the game. I’m a captain who wants to play the game with a smile on their face and yesterday I fell short of my expectations and our team standards. So I’m human, I want to apologise for the mistakes that I made yesterday. It’s certainly not a reflection of the way I want to lead this team. We’ve set really high standards over the last 18 months and yesterday was a bit of a blip on the radar and something that I felt I needed to come out and address,” said Paine.

Meanwhile, Tim Paine has always set up the right examples since the Sandpaper gate incident and he has led Australia from the front. However, the final day of the Sydney Test match was an exception when Paine let his frustrations grow on himself. Paine is known for his banter behind the stumps but it was more of a cranky chatter from him on the final day.

In fact, Paine was earlier sanctioned 15% of his match fees for using obscenities at the umpires after a decision had gone against Australia. The Australian captain had also received one demerit point for having a go at the umpires.