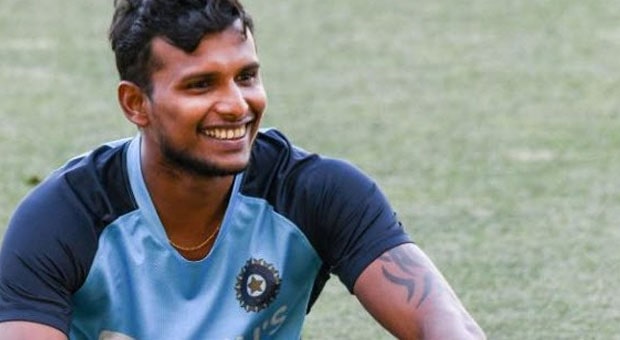 It has been a fairytale start of International cricket for India’s fast bowler T Natarajan. The left-arm pacer impressed one and all while playing for Sunrisers Hyderabad in the Indian Premier League. Natarajan was accurate with his yorkers and variations for the Orange Army and went on to scalp 16 wickets for the franchise in IPL 2020.

Furthermore, Natarajan was also added to the ODI squad after Navdeep Saini complained of back pain. The fast bowler from Salem, made his ODI debut and scalped two wickets for 70 runs.

Natarajan then impressed with his skills in the T20I format and scalped six wickets in three T20Is against Australia. The fast bowler also finished the series as the leading wicket-taker and received praise from all over the globe.

Subsequently, Natarajan was added to the Test squad when Umesh Yadav was ruled out of the series due to a calf injury. Natarajan became India’s 300th Test player when he was handed over the cap by bowling coach Bharat Arun.

Ergo, Natarajan has become the first Indian player to make an International debut in all three formats on the same tour. In fact, it has been a good debut for Natarajan as he has scalped two wickets.

Natarajan got extra bounce while bowling to Matthew Wade and Marnus Labuschagne and produced the top edges of both the batsmen to get India back into the contest. Furthermore, the fast bowler has been economical in his bowling as he has conceded 42 runs in 17 overs. However, Natarajan has also bowled five no balls and he would like to tighten the screws.

Australia are currently 229-5 after 73 overs on the opening day.