Home » Cricket » Aus vs Ind 2021: We didn’t build the pressure the way we wanted to – Josh Hazlewood 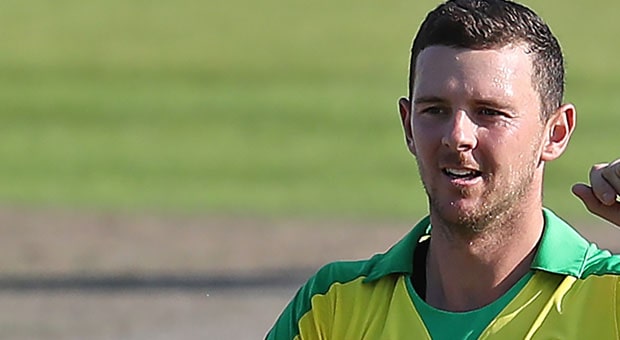 Australia’s ace paceman Josh Hazlewood believes the team let the Indian team ‘off the hook’ after taking the first six wickets. The hosts were right on top when Josh Hazlewood got the crucial wicket of Rishabh Pant, who had scored a fine knock of 97 runs in the Sydney Test.

Washington Sundar was playing his debut innings whereas Shardul Thakur was yet to get off the mark at the Test level. Thus, there was a golden opportunity for Australia to wipe out the tail in a jiffy as the visitors were still in arrears by 183 runs.

However, Sundar and Thakur went on to get a big partnership of 123 runs, which is the second highest of the series. Sundar played classic drives through the off-side whereas Thakur was able to punish anything that was short and wide.

In fact, it was noticed that the potent Australian bowling line-up, which has all the experience under their belt, were not consistent with their line and length. The Aussie bowlers were all over the place and both the batsmen made great use of the loose balls. The hosts’ fast bowlers were short in their length and they hardly bowled at the stumps to give an edge to inexperienced batsmen.

Australian bowlers could not build the pressure and both Thakur  and Sundar scored at the healthy run-rate to get their team back in the contest.

Josh Hazlewood was the pick of the Australian bowlers as the lanky paceman scalped another five-wicket haul. However, Hazlewood was a bit disappointed with the team’s bowling performance after having India on the backfoot.

“There’s a little bit of frustration there, obviously. Sometimes when you think (they’re) six down, you’re well on your way to knocking them over. We just let them off the hook there and probably didn’t build pressure the way we wanted to.”

On the other hand, Australia’s veteran off-spinner Nathan Lyon, who is playing his 100th Test match, didn’t have a great outing as he could scalp a solitary wicket of Rohit Sharma. Lyon conceded 65 runs in 28 overs but couldn’t build the pressure. However, Hazlewood defended his fellow bowler as he stated that there was hardly any assistance for the spinners.

“There’s a little bit of spin but not a great deal. Obviously, the Indian players are great players of spin as well and we’ve seen that throughout the series,” Hazlewood added.