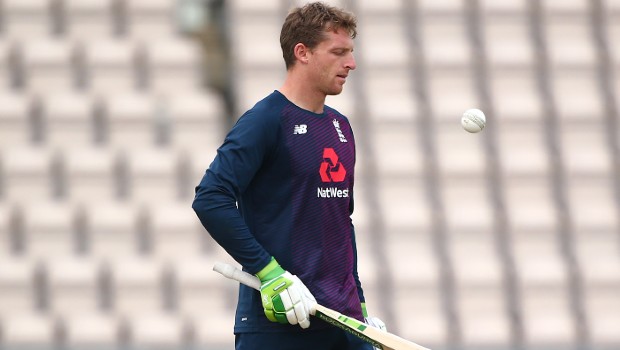 Australia’s pack leader Mitchell Starc reckons that his team needs to come up with a better plan against England’s wicket-keeper batsman Jos Buttler. The England opener was at his absolute best in the second T20I at the Rose Bowl, Southampton as he scored a fine knock of 77 runs off just 54 deliveries with the help of eight fours and two maximums, to take his team to a convincing win by six wickets. The pugnacious batsman had also scored a fine knock of 44 runs in the first T20I against Australia.

England have taken an impregnable lead of 2-0 in the three-match series and they will also have a chance to replace Australia from the numero uno position in the ICC T20I rankings if they go on to win the final match. Buttler has had a great summer as he has batted at the top of his game.

The wicket-keeper batsman had scored 265 runs in the Test series against Pakistan and carried his Test form into the white ball format. Buttler can take the game away from the opposition and Australia will need to find a method by which they put brakes on the right-hander.

The 29-year old batsman has great numbers in the shortest format of the game as he scores his runs at an impressive strike rate of 140.72. Buttler can make great use of the fielding restrictions and he is well known for his pyrotechnics.

“He’s someone we’re going to have to plan for the third game, and obviously the one-dayers as well,” Cricket.com.au quoted Starc as saying.

“When you get someone striking the way he has for the last two games, it’s obviously powerful for T20 cricket in such a short format. We’ll have to chat as a group tomorrow,” he added.

Buttler has been a massive batsman for England, especially in the shortest format of the game. England have come up with two complete performances to take the series whereas Australia have struggled to get going. Starc added that they have had sufficient time to train and there are no excuses for losses.

In fact, Australia had the first T20I in their grab when they needed 65 runs from 55 balls with 10 wickets in hand but they went on to give the match to the hosts.

Australia would aim to turn the tables in the final T20I at the same venue of Rose Bowl, Southampton on 8th September. England is currently the best white ball side in the world and Australia will need to come up with better performances.