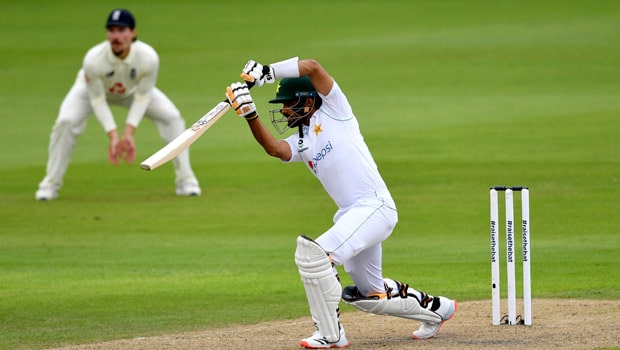 Pakistan had a perfect opening day of their tour as they finished 139-2 after Azhar Ali won the toss and decided to bat first. Pakistan openers Shan Masood and Abid Ali batted on the mantra which is ideal for English conditions – play the first hour, leave the ball out off-stump, give respect to the bowlers.

Masood and Ali batted together for 15 overs and James Anderson and Stuart went wicketless in their opening spell, which is a rarity in the recent past. However, Jofra Archer peppered Abid Ali with bouncers and then bowled a fuller one that nipped back in to hit the top of off-stump.

Ali was not forward and his front foot went nowhere as it remained planted to the crease as he was waiting for the bumper. Subsequently, Chris Woakes was able to plumb Azhar Ali in front of the wickets. The Pakistan captain thought he had got an inside edge and reviewed but it turned out to be three reds on the review.

Babar Azam took his time in the initial stage and struggled to get going. On the other hand, Shan Masood looked solid in his defence.

Azam then soon found his groove and played some trademark shots. James Anderson bowled a blight spell and bowled down the leg-side and Babar Azam was able to take advantage as he clipped the ball to the leg-side in style.

The flamboyant batsman made good use of his feet to get down the track against Dominic Bess. Azam played an aerial shot to get to 49 against Bess and then nudged a single on to the off-side to get to his 14th Test fifty.

On the other hand, England were on the sloppy side as the bowlers didn’t bowl in the right areas. Shan Masood received two lives when he was at 45 and Jos Buttler didn’t have a great day. First, there was a difficult chance when Bess produced an outside edge of the left-hander’s bat. After the Tea break, Shan Masood pranced down the wicket to Bess and Buttler could not collect the ball as it bounced more than he expected.

Only eight overs were possible as the bad light stopped play and Pakistan was the happier of the two sides when stumps were called off.