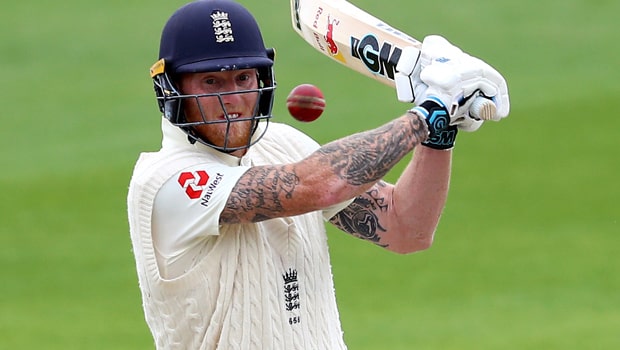 You must have heard about the critically acclaimed America’s animated series – Ben 10 which has Ben Tennyson on its central axis who had acquired power through the device—the Omnitrix. He had got some exceptional powers through his watch – and this had entertained even elders.

And, there are some sorts of similarities when it comes to the transformation, challenges and courage to come up and perform to perfection on the stage.

Here we’re talking about the other character – ‘Ben’.

With spectators being in an exhilarated state but behind closed doors, the reputed batsman came to the crease when his team was under the cosh – at 81-3, already 1-0 down in the three-match series against the West Indies, at Old Trafford, Manchester. When he was finally dismissed for a marathon knock of 176 runs off 356 balls – his longest ever Test innings in terms of balls faced – after 111 overs and 487 minutes, the team score read a formidable 395 runs.

When Kraigg Brathwaite and Shamarh Brooks were taking the West Indies’ ship to its mooring in the second essay, he bowled an 11-over spell, out of which mostly were bumpers, from around the wicket, targeting both the right-handers’ ribs. He could not find any success in the first nine overs – but he kept at it and was finally rewarded when he produced the leading edge of Brathwaite’s bat and took a simple return catch, on the first ball of his 10th over. That was some prize.

And after West Indies were skittled out for 287 in the final session of the penultimate day, quick runs were the need of the hour. As expected, he was asked to open the innings for the first time in the Test setup and he didn’t disappoint. He recorded an unbeaten knock of 57-ball 78, including four fours and three maximums, thereby becoming the quickest England opening batsman to score a Test fifty.

In the West Indies’ second innings, Shamarh Brooks and Jermaine Blackwood were taking the tourists to a draw, but he was able to strike just at the stroke of tea. He continued with his short-stuff stratagem, removing the visitors’ Southampton hero—Blackwood, with a short-pitched ball.

Overall, he batted for 585 minutes, scored 254 runs, including 21 fours, five maximums, faced 413 balls, bowled 27.4 overs, took three wickets, claimed one catch of his own bowling (albeit he shelled one catch but we will give him that). No surprises for guessing, he is Benjamin Andrew Stokes – the machine and above all the confidence man.

When it was questioned that if too much was asked of him with the ball, Stokes said, “Absolutely not. I will give everything to the team, whatever is asked of me”.

It was a typical answer from a player who gives his all whenever he turns on the field.

There is a fine example of the same. On the first ball of 43rd over, in which he later dismissed Blackwood, Stokes chased the ball towards the long-off boundary of his own bowling like a hungry predator, a chase no fast bowler would ever even dream of. In the end, the two batsmen ran four runs and it was not like runs mattered a lot at that stage as West Indies’ chase was already out of the question but then this is how Stokes plays, always 120% on the field, that’s his passion, that’s his commitment, that is his heartbeat.

When England captain Joe Root was asked to describe Ben Stokes’ efforts, the former replied, “Mr Incredible? I can’t think of a better one. He probably looks a bit like the cartoon character, too.”

No doubt, Stokes is currently doing stunts as a superhero would do and he is making sure that he is saving England from tricky situations, with all his powers. He is the man of the crisis and his record in the last two years have been a testimony of the same. In fact, there were a lot of suggestions on social media that Stokes should now try to make a vaccine for the coronavirus, for the kind of form he is in.

Stokes had to adopt a completely different approach in the first innings. England was behind the eight-ball at 81-3 and he had to rebuild the innings with Dom Sibley. Stokes showed great patience like a monk would do, leaving the balls outside the off-stump channel. The southpaw brought up his 10th Test century off the 255th ball he faced, his strike rate read 40.39 at that stage. It was like Stokes had inherited some of his batting partner, Dom Sibley’s attributes.

In fact, it was not for the first time when Stokes had scored his runs at a snail’s pace. The left-hander had done the same during his tour de force knock of 135 at Headingley against Australia in the 2019 Ashes when he crawled to three runs off 72 balls.

This is what Stokes does.

The street-smart cricketer lays down the foundation and he knows he can later switch gears to build a building of his own. And not surprisingly he did it again at Manchester, racing from 100 to 150 after hitting the nitro button in a span of 46 balls, strike rate better than 100, connecting every ball in the middle of the bat, running hard to convert the ones into twos, he was in a different zone altogether.

There were no pit stops, there were no speed breakers but yes he wasn’t fuelled up either as he had already faced more than 300 balls.

His match-winning knock was finally put a kibosh by Kemar Roach, when he tried to reverse sweep the pacer, gloving the ball to Shane Dowrich. Stokes’ scored 176 and had control of 81 per cent according to ESPNCricinfo in his knock.

In fact, he was required to bat in the same mode in the second essay as he did in the second half of the first innings – and he once again catapulted his attack on the West Indies bowlers, taking them apart. Stokes’ whirlwind knock helped the hosts in setting up an imposing target of 312 runs.

According to Cricviz, Stokes bowled 91 bumpers in the 27.4 overs he bowled during the second Test, which means 54.8 per cent of his deliveries were short in length. He was bowling his heart out, bending his back, whenever he was given the ball by skipper, Joe Root.

Stokes mostly attacked the opposition’s batsmen’s ribcage area and two of his three wickets came off the short balls. More importantly, both of these wickets (Brathwaite in the first essay, Blackwood in the second dig) came at just the right time for England, when the West Indies’ batters were building a match-saving alliance.

Meanwhile, it has been a tumultuous year for the cricket world, with hardly any action due to the pandemic but Stokes has made sure that he has carried forward his 2019 form to 2020. He is currently the leading run-getter of the year with 612 runs in five Test matches at 76.50, scoring two fifties and as many centuries.

He is also at the top echelon of the bowling charts with 29 wickets in five matches at an average of 20.29 in 2020. The talisman is now at the numero uno position in the ICC Test rankings, as an all-rounder whereas he is placed at the third place as a batsman – which is his career-best rankings.

In the ongoing ICC Test Championship, Stokes is the second leading run-getter with 1102 runs in 11 Test matches at an impressive average of 61.22 whereas he has snared 27 wickets at an average of 27.

Surely, he is England’s best player or even the world’s best at the moment, as he is making the impact with both bat and ball.