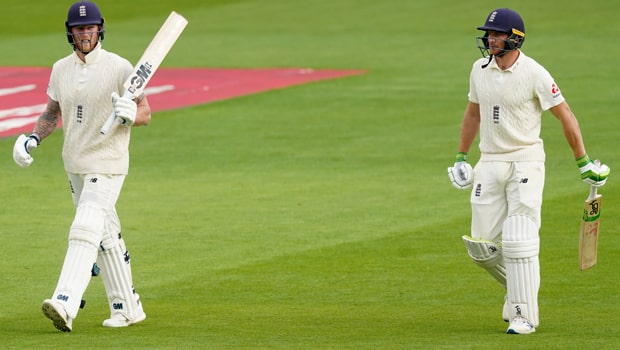 England have kept themselves in the hunt for the Wisden Trophy as they finished the penultimate day of the second Test match against the West Indies at Old Trafford as they are ahead by 219 runs. The hosts looked for quick runs in the final hour of the day when they sent Ben Stokes and Jos Buttler to open the innings after dismissing West Indies for 287 runs to gain a first innings lead of 182 runs.

However, the ploy didn’t work as the hosts would have hoped as they lost two quick wickets – both taken by Kemar Roach. Jos Buttler and Zak Crawley were both bowled by the right-arm pacer as England finished at 37-2.

Earlier in the day, Alzarri Joseph frustrated the England bowlers as the home side had to wait for their first second wicket. Joseph was also dropped by Ben Stokes at second slip off Chris Woakes. However, Dom Bess was finally able to provide the much-needed breakthrough when he got extra bounce to take the inside edge of Joseph’s bat and Ollie Pope took a good catch at short-leg.

Shai Hope, who has been struggling with his form, looked good for his 25 but he was dismissed by Curran when he edged the ball to Jos Buttler. There wasn’t much in the pitch and the England bowlers decided to pitch the ball short from the round the wicket angle, targeting visitors’ batsmen ribs.

West Indies’ batters Sharmarh Brooks and Kraigg Brathwaite showed all the resistance and kept the hosts’ bowlers at bay with 76 runs stand. Ben Stokes, who is known to give his all bowled a 11-over spell and he finally got his reward when he caught and bowled Brathwaite with a short-pitched delivery after the right-hander had scored 75 runs and was looking threatening.

On the other hand, Brooks impressed with his batting technique and looked at ease against the short pitch ploy of the England bowlers. The right-hander punched the ball with confidence and played at the top of his game. West Indies were 242-4 but then the slide started.

England took the new ball as soon as it was available and switched their plan from bowl short to bowl full. Stuart Broad bowled at full cylinder as he plumbed Sharmarh Brooks in front of the wickets. Broad then got the big wicket of Jermaine Blackwood, who had played a match-winning knock at Southampton, in the similar fashion.

However, West Indies was able to soon avoid the follow-on when Roston Chase pulled Sam Curran for a boundary and also reached his fifty a couple of balls later. Chris Woakes then removed Holder, Chase and Gabriel to take three wickets and skittle the Windies for 287 runs.

England would be looking for some quick runs in the first session tomorrow and then would aim to bowl out West Indies to stay alive in the race to regain the Wisden Trophy.