Bowlers put England in a commanding position on opening day 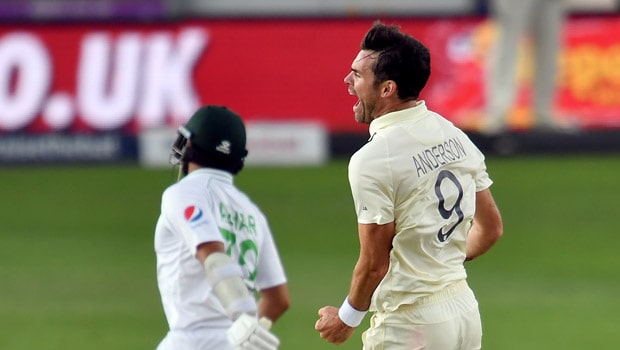 England bowlers were right on the money on the opening day of the second Test against Pakistan at Ageas Bowl, Southampton. Pakistan finished the day with 126-5 after Azhar Ali won the toss and decided to bat first. James Anderson, who was under the scrutiny for his form, scalped two wickets whereas Stuart Broad, Chris Woakes and Sam Curran, who replaced Jofra Archer, scalped one wicket apiece as England came up with a collective bowling effort.

The hosts got off to a perfect start as Anderson got the ball to move back into in-form Shan Masood, to plumb him in front of the wickets. All the eyes were then on Azhar Ali, who was criticized for his captaincy and isn’t in the best of forms.

Pakistan opener Abid Ali received two reprieves from England slip cordon with Dom Sibley and Rory Burns dropping him when he was on 1 and 21 respectively. On the other hand, Azhar Ali also had the rub of the green on his side as the bails refused to dislodge when the ball crawled on to the stumps, off the bowling of Chris Woakes.

However, both the Ali’s were able to make the most of their chances and completed a 50-run stand. As rain interrupted the final overs of the first session, Pakistan were the happier side as they went off with 62-1.

However, things quickly changed as Anderson had Azhar Ali caught at slip by Rory Burns, who didn’t squander the chance this time around.

Abid Ali soon brought his fifty with an outside edge towards the third man. In fact, Ali played the ball late under his eyes and also played his defensive shots with soft hands to score the majority of his runs in the third man region. However, his gutsy knock ended when Sam Curran got some extra bounce and moved the ball away from the right-hander, to get the outside edge to Rory Burns.

Babar Azam played some trademark shots and flicked a couple of boundaries on the leg-side but he was getting consistently beaten outside the off-stump by James Anderson.

England could not get Azam but Stuart Broad was able to dismiss Asad Shafiq as the lanky pacer produced an edge, which was taken by Dom Sibley, who made up for his error this time, at third slip.

Fawad Alam, who had to wait for a long period of 11 years for his opportunity, could not even trouble the scorers when he was trapped in front of the wickets by Chris Woakes. Richard Kettleborough decided to give the decision in favour of the visitors but Joe Root decided to go for the review and it returned as three reds.

Only 45.4 overs were possible on the opening day as rain continued to make its appearance.