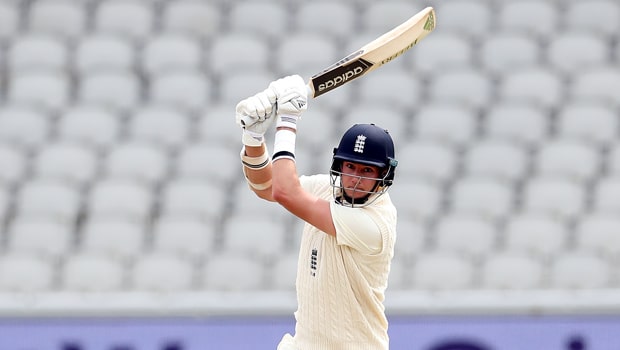 It was another day when England dominated as West Indies lost two wickets with just 10 runs on the board after they were set an imposing target of 399 runs – with the hosts declaring their second innings at 226-2. England received a healthy first innings lead of 172 runs after Stuart Broad ran through the West Indies lower order. Broad, who is only a wicket away from joining the 500-wicket club, took six wickets in the day.

England didn’t have the best of the first hour’s play after Jason Holder and Shane Dowrich kept them at bay. Holder also had the rub of the green on his side as he was brilliantly caught by Ollie Pope at square-leg, off the bowling of Chris Woakes. However, the reply showed that Woakes had no part of his shoe behind the line.

Broad didn’t take long to wipe the West Indies’ tail. First, he had Hodler plumb in front with his typical in-nipper and then Rahkeem Cornwall, who was looking to be aggressive, had the same mode of dismissal when he looked to play a big shot down the leg-side. Roach was caught by Root at first slip – which gave Broad his 18th five-wicket haul – whereas Dowrich was caught at mid-on by Chris Woakes when he looked to smash the ball on the leg-side.

England openers safely played out the four overs before the Lunch session. Burns and Sibley didn’t change their playing style and batted as they usually do. On the other hand, West Indies faced some injury woes as first Jason Holder was struck on the finger in the slips whereas Shane Dowrich was hit on the face by a delivery from Shannon Gabriel.

Dowrich went back to the dressing and Shai Hope took the gloves. Subsequently, Joshua Da Silva took the role and had a chance to stump Rory Burns but slipped when he tried to flick the bails off the bowling of Roston Chase. In fact, West Indies had four substitutes on the field at one stage.

There weren’t many other chances for the tourists and soon Burns and Sibley brought up the first hundred opening partnership of the series as well as their respective fifties. Sibley was dismissed LBW by Holder but Joe Root scored his runs at run-a-ball to add trouble for the West Indies.

Root thought it was enough when Rory Burns was dismissed for the fourth time in the series by Roston Chase but not before he scored a fine knock of 90 runs. England declared at 226-2 and thus gave a target of 399 to the visitors.

England had a chance to bowl six overs at the West Indies before the close of play and Broad once again showed his class as he picked up from where he had left in the second innings. The veteran dismissed John Campbell on his third delivery when the southpaw’s outside edge was taken by Joe Root at first slip. West Indies’ ploy of sending a nightwatchman in the form of Kemar Roach didn’t work as he too was dismissed by Stuart Broad.

Broad pushed hard to get his 500th wicket but couldn’t get it and he would need to sleep with 499 wickets for now. However, rain is forecasted for Monday in Manchester.