Home » Cricket » Can Khaleel Ahmed reassert his authority in the Indian team?

Can Khaleel Ahmed reassert his authority in the Indian team? 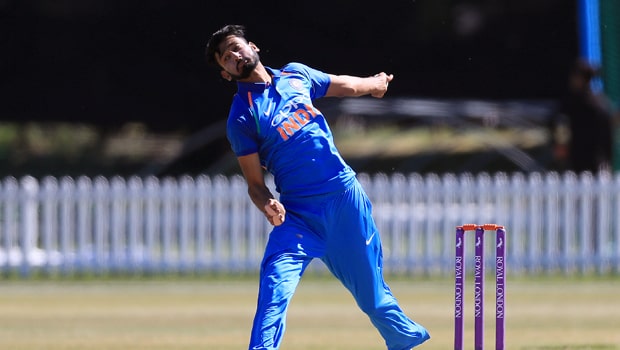 Khaleel Ahmed seemed all set to be India’s third pace bowling option for their World Cup 2019 campaign until Mohammed Shami news spread and made a late entry into the scene. Shami’s superb ODI comeback in the series against Australia and New Zealand pushed Khaleel Ahmed out of the race completely. However, Khaleel has a chance to redeem himself now as he has been picked in the ODI and T20I squads for the tour of West Indies.

By the time the squad for the World Cup was announced, Shami had impressed the selectors with some more breathtaking spells in the Indian T20 League as well. And the selectors had even rewarded him with a place in the squad. Khaleel, on the other hand, was yet to get any game during that season and, hence, was left out of India’s squad for the mega event as well.

However, the World Cup snub did more good to Khaleel than bad. He seemed a totally different bowler once he got his first game of the 2019 Indian T20 League season, which was immediately after the World Cup squad was announced. The 21-year-old had turned himself into a wicket-taking force to reckon with and it was visible in his Indian T20 League season statistics which read 19 wickets in nine matches at an excellent average of 15.10 and an outstanding strike-rate of 11.00.

In fact, his strike-rate was the best recorded by a bowler in the 2019 edition. His superb performance had given Hyderabad some much needed penetrating force in their bowling unit. It was mainly the swing he extracted with the new ball and his superb variations in the middle-overs, and towards the death, which helped him in fetching wickets. A responsibility was put on Khaleel’s young shoulders, midway into the tournament, and he delivered under pressure without any fuss at all.

His exploits didn’t stop there. Khaleel emerged as the highest wicket-taker for India West Indies test match as well. He picked up a total of nine wickets in four matches at an excellent average and strike-rate of 17.33 and 22 respectively. It included one four-wicket haul and another superb spell of 3/16 as well. The series was played in Caribbean nation and that has helped Khaleel in getting acclimatized to the conditions a lot. This will be a big advantage for him while playing for the senior team against West Indies cricket news latest updates in the limited-overs series starting on August 3.

India’s fascination with left-arm seamers is no secret and, hence, Khaleel will most probably feature in almost all of the games during the tour. That will give him ample opportunity to prove his mettle as a bowler and, thus, get his place back in the Indian team once again. (for more Team India latest news)