Home » Cricket » Can Umesh Yadav stake a claim in the absence of Bumrah?

Can Umesh Yadav stake a claim in the absence of Bumrah? 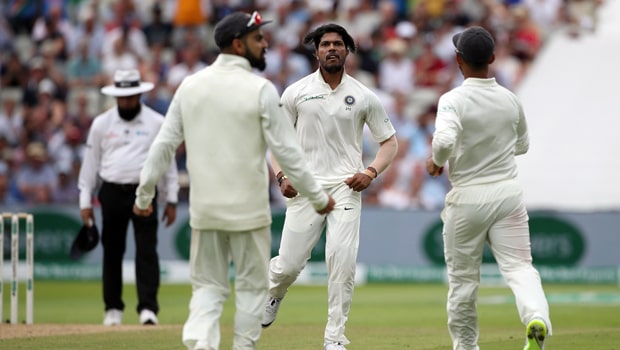 Umesh Yadav has been the highest wicket-taker among the Indian pacers in Tests at home since 2017. He has taken 40 wickets at an average of 22.62 and a strike-rate of 42.2 during this period. Yet, the selectors chose to overlook him for the upcoming three-match home series against the Proteas.

The trio of Jasprit Bumrah, Ishant Sharma and Mohammed Shami (see more Mohammed Shami news), who came up with terrific performances during India’s overseas assignments since last year, were preferred for this series once again. Recent form and performance was given more importance than an individual’s overall track record while picking this squad. Hence, Umesh lost out on his place in the side.

India have been dealt a major blow to their Test series against SA, as Jasprit Bumrah has been ruled out due to a stress fracture to his back.

Umesh Yadav has been called up

This would have been Bumrah’s 1st home Test series

However, he is back in contention once again as India’s pace spearhead, Jasprit Bumrah news, he is now ruled out of the series with a minor stress fracture in his lower back. Umesh last played a Test match for India at Perth in December 2018. So, he has been out of the side for 10 months now and, hence, this is his chance to prove his worth and earn his place back in the side.

Out of the 14 overseas Tests India has played since last year, Umesh has featured only in two of them. And he claimed five wickets in those two matches at a dismal average of 43 and an equally disappointing strike-rate of 73.2. These kind of erratic performances from time to time is the reason why Umesh has been in and out of the side consistently.

In fact, the last time Umesh played in India West Indies test match, he ended up picking 10 wickets in the match and had been adjudged the Player-of-the-match as well. So, it’s his inconsistency that always puts his position in the side in jeopardy. One moment he is a world-beating bowler and the other moment, he looks worse than ordinary.

He might bowl one or two of those inspiring spells but he is generally all over the place most of the times. This is a weakness he needs to work upon. He has the pace and the fitness required to bowl long spells in Tests. All he needs to do now is to bring a little bit of discipline and consistency in his bowling.

India will most probably start with two Pacers in each of the three matches. Ishant and Shami look like the preferred choices in the queue with Bumrah out of contention. However, if Umesh gets even one chance in the series, he will have to make it count.