Home » Cricket » Cannot believe they are going in with such a long tail: Nasser Hussain questions India’s playing XI

Cannot believe they are going in with such a long tail: Nasser Hussain questions India’s playing XI 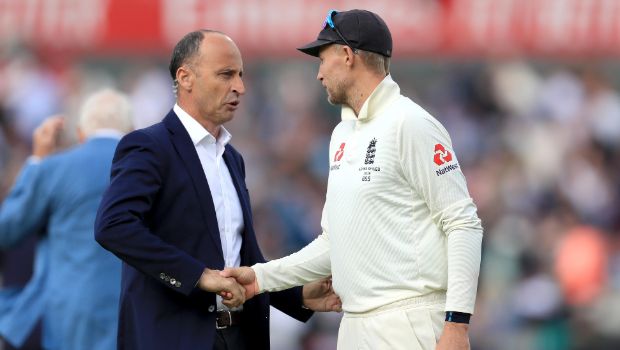 The visitors decided to back their winning combination of the Lord’s Test match and went with an unchanged playing XI. However, as India is playing with four fast bowlers, who are not known for their batting credentials, they have a long tail.

Jasprit Bumrah and Mohammed Shami were able to put together a magical partnership of 89 runs on the final day of the second Test match and thus India decided to back the same final XI. However, both of them were dismissed without troubling the scorer in the first innings of the third Test.

The tourists have not included Ravichandran Ashwin in the first three Test matches, which has been a tad surprising as he has definitely improved his record in overseas conditions. On the other hand, Ravindra Jadeja has been in good form with the bat but has failed to deliver with the ball as he has gone wicketless.

Furthermore, India’s middle order has been struggling as Cheteshwar Pujara, Virat Kohli and Ajinkya Rahane have been averaging in the mid 20s in the last two years and thus the team’s batting unit has been under pressure.

Nasser Hussain wrote for Daily Mail in his column, “I have said India’s batting looks fragile, and I still cannot believe they are going into a series in England against a Dukes ball with such a long tail. And that still applies despite what Bumrah and Mohammed Shami did at Lord’s.”

“Now India are going in with four No 11s. It cannot be the way to go in England — you can always lose a couple of early wickets, as they did on Wednesday, and your No 8 in Shami has to start looking for his pads,” he added.

Hussain, 53, feels England let the emotions get the better of them on the final day of the Lord’s Test but they were able to correct that mistake on the opening day of the Leeds Test.

“I do understand why they got it so wrong in the second Test. It was because their main man in Jimmy Anderson was targeted by Jasprit Bumrah on that third evening, and you have to allow for the emotion that got to them. Here (at Leeds) they corrected it spectacularly,” Hussain wrote.

“England and Joe Root got it badly wrong on that fateful final morning at Lord’s. But the best thing about their bowling performance on day one was how much they learnt from that mistake,” Hussain stated.