Cheteshwar Pujara reveals the advantages of batting with Virat Kohli 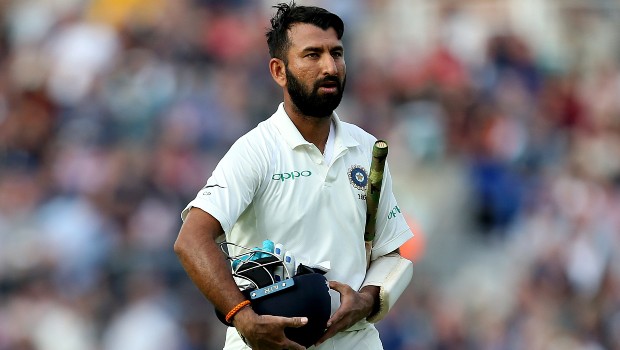 India’s Test specialist batsman Cheteshwar Pujara is a spine of the batting order. Pujara has all the patience in the world and he has got a solid defence, which helps him in playing long innings. On the other hand, Virat Kohli generally gets more attention as he has a great record and he is regarded as a big player.

Kohli is always positive and he is looking for runs, which according to Pujara takes the pressure off his shoulders as the captain keeps the scoreboard ticking. If the ball is in the arc, Kohli is expected to go for it and he is always hunting for runs. In fact, Kohli has always talked about showing intent on the field and he is known to give his 120% on the field.

The Indian captain also pushes his batting partner in running between the wickets. Kohli is a livewire and it is not often easy to match his standards.

Pujara added that he enjoys playing with Kohli as the captain is very positive in his game. Furthermore, the opposition bowlers also focus more on Kohli, as he is a bigger player and thus Pujara can take the advantage.

“I enjoy playing with him (Kohli) and the reason is that he is a very positive player. Once he is at the crease, I know, bowlers will try to take his wicket because they think they can get him out early”, Pujara told Cricbuzz.

“But he is always positive. If he gets a half-volley on the first ball, he will try to hit it for a four. So, the scoreboard keeps moving and there is not much pressure on myself because the opposition is thinking of taking the wicket of Virat.

So the focus keeps shifting to Virat and I can be relaxed on the other end. There have been instances where opposition have been focusing on Virat and I have got a few loose balls”, he added.

Both Virat Kohli and Cheteshwar Pujara are poles apart in their batting approach and both of them have done a fine job for the Indian team. Kohli can take the game away from the opposition whereas Pujara is known to play a gargantuan knock.

Pujara was at his best on the previous tour to Australia as he had scored 521 runs in four Test matches at an average of 74.43. The right-hander scored three centuries and played a huge role in India’s maiden Test series win on the Australian soil. The solid batsman would once again like to be at his best in the upcoming tour to Australia and he is going to hold the key for the visitors.

The first Test match will take place at the Gabba, Brisbane from December 3.