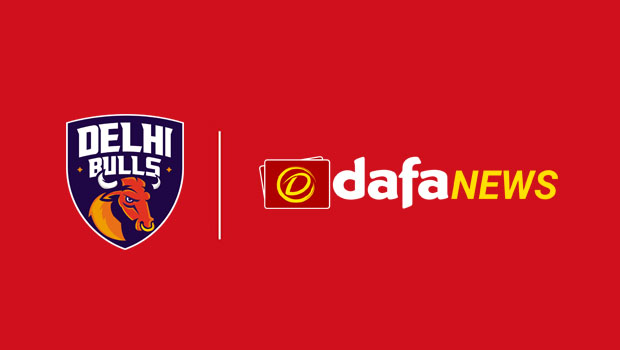 DafaNews is delighted to announce that we have signed a partnership with the T10 Abu Dhabi league franchise Delhi Bulls.

As part of the partnership, DafaNews will appear on the back of the franchise t-shirt throughout the league’s upcoming fourth season. The fans can stay updated with the latest news regarding Delhi Bulls on DafaNews.

On Monday, the franchise unveiled their jersey for the forthcoming season of the league as their skipper Dwayne Bravo sported the new jersey.

The team jersey was revealed through a virtual engagement attended by Bollywood actress and team’s Brand Ambassador, Sunny Leone.

Sunny Leone said, “I have been eagerly waiting for the 4th edition of the T10 league to commence, and I am delighted and honored to be associated with Delhi Bulls. I am excited about cheering for the team once again, and I really want us to win the league this time. I wish the team and staff all the success in the upcoming season.”

Speaking at the jersey launch event, Delhi Bulls’ Owner, Neelesh Bhatnagar, said, “The much-awaited 4th season is finally here, and the team has put in a lot of hard work to make it happen during such trying times. The jersey’s new design is phenomenal, and I just cannot wait to wear it for all the games. Additionally, we are happy to bring Sunny Leone back on board as our Brand Ambassador and hope we have an enriching and competitive season that leads us to the cup.”

The fourth season of the Abu Dhabi T10 League will begin on the 28th of January, and the final will take place on the 6th of February 2021, at the Sheikh Zayed Cricket Stadium, Abu Dhabi. The tournament will be televised on Sony Ten, Sony Six, and the SonyLiv App.

You can also catch all the updates regarding the Abu Dhabi T10 league and Delhi Bulls on DafaNews.