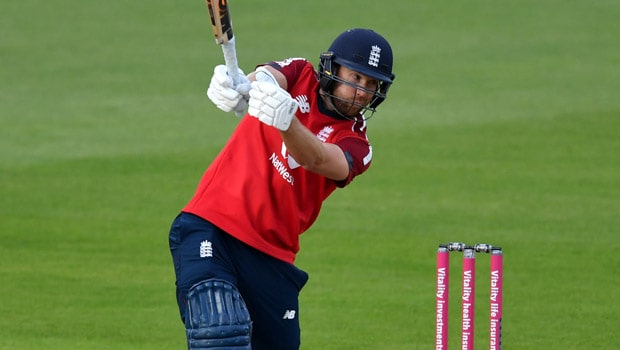 England’s southpaw batsman Dawid Malan has made a jump of four places to get to the top of the ICC T20I rankings after England won the three-match series against Australia by 2-1. The left-hander scored a total of 129 runs, which included a match winning knock of 66 runs in the first ODI at Rose Bowl, Southampton.

Malan had achieved his previous best ranking of second place back in November 2019. The southpaw is now eight points ahead of Pakistan’s limited overs captain, Babar Azam, who has slipped to the second place.

England’s opening batsmen Jonny Bairstow and Jos Buttler also made gains in the latest update of the rankings. Bairstow, who scored 55 runs in the final T20I, made a jump of three places to get to career best 19th place. Jos Buttler, who was awarded the Player of the series award for scoring 121 runs, has moved from 40th to 28th place.

On the other hand, Australia’s limited overs captain Aaron Finch who scored 125 runs in the series, has retained his third place in the rankings table. Australian all-rounder Glenn Maxwell was able to hold on to his sixth place among the batsmen whereas he moved up by one place among the all-rounder’s list.

England’s spinner Adil Rashid finished the series as the leading wicket-taker with six wickets. Thus, the leg-spinner made a vault of two places to reach the seventh spot in the rankings. Australia’s Ashton Agar took five wickets in the series which has helped retain the third place in the rankings.

Kane Richardson has moved into the top 10 after taking three wickets in the series. Mitchell Starc (up seven places to 18th) and England’s Mark Wood (up 41 places to 79th) have also made a move up in the rankings.

Australia were also able to reclaim the top position in the ICC T20I rankings after England had taken the numero uno position. Australia now have 275 rating points whereas England have 271 points under their belt.