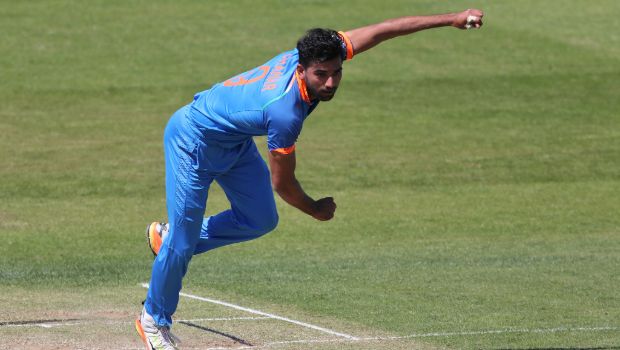 India’s fast bowler Deepak Chahar hogged into limelight after he played a match-winning knock of unbeaten 69 runs off 82 balls in the second ODI against Sri Lanka on Tuesday.

Chahar, who was not known much for his batting skills, took the match deep and finished off the game in style.

India was down and out of the contest at 193-7 but Chahar kept the team in the match with his incredible batting. Chahar, like Dhoni used to do, took the match deep along with Bhuvneshwar Kumar, who has the experience under his belt.

The right-hander from Rajasthan scored his maiden fifty and showed great maturity. The 28-year old took calculated risks and played at the top of his game. In fact, Chahar and Bhuvneshwar Kumar decided not to take any risk in the 48th over which was bowled by Hasaranga, who was the pick of the Sri Lanka bowlers.

Chahar has played alongside MS Dhoni for Chennai Super Kings in the IPL and he has definitely learned a lot from the great finisher.

“After a long time, after years, I sat and watched India’s innings. The match today was such that I sat and was glued to the screen. I was praying for India to win and Deepak finished in Dhoni style. He used to hit a six to win the game, he hit a four. Brilliant innings. Intelligent innings, like a typical batsman. It didn’t look as if Deepak Chahar is a bowler, but a batsman who’s taken this match till the end and finished it. So, he too is an all-rounder, I would say,” Sehwag told Cricbuzz.

On the other hand, former Indian fast bowler Ashish Nehra was also impressed with Deepak Chahar’s guile to take the match deep and get his team over the line. The right-hander was able to stand tall to the challenge and didn’t bog down under pressure.

“That he is capable with the bat is something he has also shown for CSK. But like Viru said, more than the runs, the intelligence with which he batted was commendable. When he got the bad balls, only then he attacked. After Krunal Pandya got out, he (Chahar) got some 3-4 half-volleys but even then he did not go after it,” Nehra told Cricbuzz.

“He had it in his mind that he has to take the game deep and that is the mindset that we talk about. And see, he has delivered one win for India. That is the difference experience makes. Dhoni used to do it and it is something he has passed on to the youngsters. This is just another example.”

The third ODI will be played at the same venue on Friday.